Kings pull away from Blackhawks to snap skid 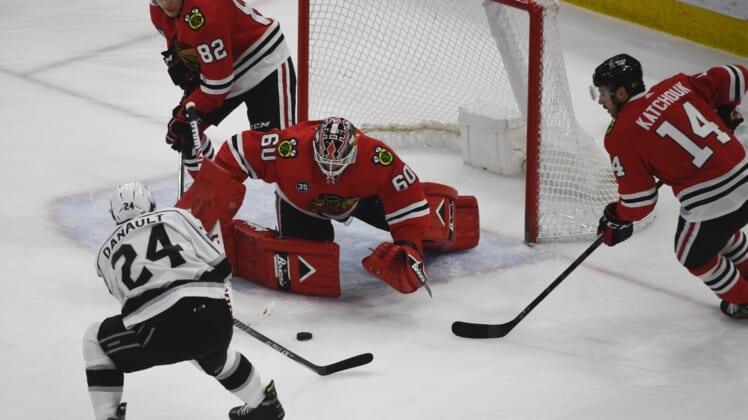 Blake Lizotte scored twice, including the game-winner late in the second period, and Phillip Danault had a goal and an assist as the visiting Los Angeles Kings snapped a three-game losing streak with a 5-2 victory against the Chicago Blackhawks on Tuesday.

Los Angeles (39-26-10, 88 points) moved within two points of the Edmonton Oilers for second place in the Pacific Division while sending the Blackhawks to their eighth straight defeat (0-6-2).

Kings goaltender Jonathan Quick stopped 18 of 20 shots to earn the 354th win of his career and move into 21st place on the all-time NHL list, snapping a tie with Evgeni Nabokov and Rogie Vachon.

The Kings seized control midway through the first period, scoring twice in a span of 3:07. Trevor Moore got things started, taking advantage of an open opportunity at the far post to slip a shot past Blackhawks goaltender Collin Delia (31 saves).

Danault was credited with the team’s second goal. A centering pass deflected off Delia and Chicago defenseman Caleb Jones and into the net.

The Blackhawks drew within 2-1 at 16:27 of the second period, as Taylor Raddysh found space in the slot and buried a feed from Philipp Kurashev. Los Angeles responded quickly, though, as Lizotte gathered a rebound of a blocked shot and beat Delia 33 seconds after the Raddysh goal.

Jordan Spence scored at 5:08 of the third to put the Kings ahead 4-1, as Los Angeles responded after Quick denied Blackhawks rookie Lukas Reichel on a prime scoring chance.

Patrick Kane scored for Chicago at 16:42 of the third period, giving the veteran 30 points in his past 19 games. Raddysh had the primary assist on the goal, while Kurashev tallied his second helper of the night.

Lizotte had an empty-net goal at 18:24 to account for the final margin.

Dustin Brown and Viktor Arvidsson had two assists each for the Kings.

Los Angeles improved to 9-2-1 in the past 12 meetings with the Blackhawks, including 4-1-0 over its past five visits to Chicago.