Kings, Magic battle after living on the edge with close results 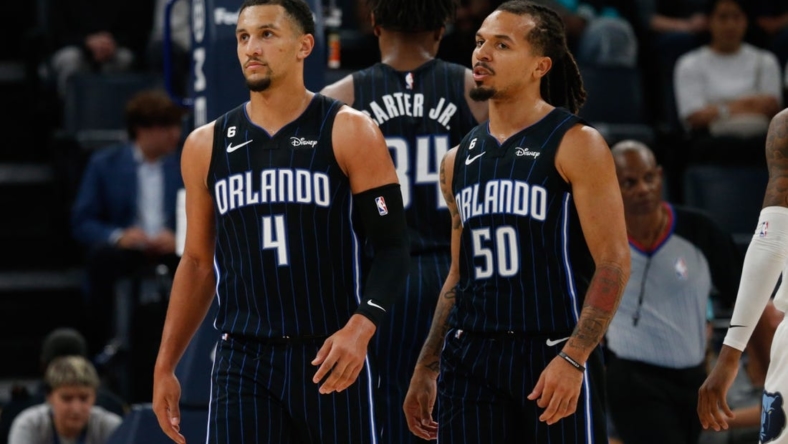 The Sacramento Kings can steal from Golden State’s game plan once again Saturday night as they play their fourth consecutive game against a recent Warriors opponent when they visit the Orlando Magic.

In the Magic, Sacramento will see a team coming off its most impressive win of the season. Yes, it came against the Warriors on Thursday, a 130-129 thriller at home.

Coincidentally, the Kings and Warriors will meet Monday in San Francisco in each team’s first game after a lengthy Eastern swing.

Both the Kings and Magic have had more than their fair share of close contests so far.

Sacramento is coming off a 110-107 loss at Miami on Wednesday that was its sixth game out of seven determined by seven or fewer points.

In fact, Wednesday’s tight defeat might have gone into overtime if the referees had called Miami’s Tyler Herro for traveling before his game-winning 3-pointer.

As is customary, the NBA reviewed the play a day later and agreed with Kings coach Mike Brown that Herro had indeed traveled.

“Tyler Herro’s a great player,” Brown said, “but at the end, he traveled. My guys fought their behind off for close to 48 minutes, and to (see Herro) pump-fake on a sidestep — a sidestep or hop — and then one-two and a shot and not make that call, to me, it’s just unbelievable.”

The Kings had rallied into a tie on a pair of Domantas Sabonis free throws with 12.5 seconds left. Sabonis finished with 22 points and 12 rebounds, his fourth double-double of the season.

Jalen Suggs was the Magic’s hero in their one-point win over the Warriors. He buried a tiebreaking 27-footer with 37.7 seconds remaining, then stole Stephen Curry’s pass, got fouled and dropped in what turned out to be the difference-making point 6.2 seconds later.

He finished with 26 points, leading seven Orlando players in double figures in a balanced attack.

The narrow win came after the Magic had lost seven of their first eight games by an average of just 8.7 points.

Suggs afterward took a 48-minute view of the win over the defending champs, rather than focus on his late heroics.

“The shots went in and we got stops,” Suggs said. “All of us contributed all night long. I ended up getting the ones at the end. The ones that happened before that are at the same level. If they don’t do those things and us as a team didn’t play like that, I don’t get those opportunities.”

The Kings swept the two-game season series from the Magic last season, but needed overtime to prevail 114-110 in Orlando in March.

It was Sacramento that had the balanced scoring that night, with Davion Mitchell leading seven Kings in double figures with 22 points.