Kings look to bounce back vs. Red Wings 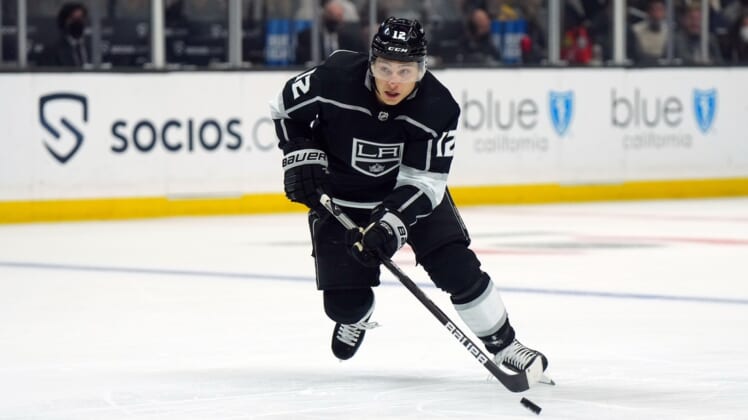 Firing 48 shots on goal routinely results in a victory, but the Los Angeles Kings are preparing to host the Detroit Red Wings on Saturday night on the heels of a 4-2 loss to Nashville on Thursday in which they nearly hit the half-century mark in shots.

The loss snapped a two-game winning streak, but the Kings were not about to let the defeat frustrate them too much.

“If you look at our five-on-five play, I think we outplayed them the whole night from start to finish,” said captain Dustin Brown, who scored in his return from COVID-19 protocol. “Give up two power-play goals and (an) empty-net (goal), it’s one of those games where … we were the better team, but it’s not always the way it goes.”

That said, the Kings put themselves in a major hole against the Predators, falling behind 3-0 before the three-minute mark of the second period before cuing up a comeback attempt that fell short. Still, coming within a whisker of drawing even before their fate was sealed by an empty-net goal makes the loss slightly more tolerable.

“You have to build on whatever you have,” Brown said. “I haven’t been around the team for the last two weeks, so it’s just getting the vibe of the team back. It’s a good sign that, when we’re down 3-0, we don’t just fade away. The last game I played, we were down 2-0 in Washington and we found a way. Having that type of mentality, regardless of the score we have a chance, that’s another good sign.”

The Red Wings arrive in Los Angeles after Thursday’s game at Anaheim was postponed hours before puck drop due to an outbreak affecting the Ducks. That game is now scheduled for Sunday.

The Red Wings — who had four games scheduled around Christmas postponed — last played on Tuesday, when they used a pair of short-handed goals 37 seconds apart to stake a three-goal lead and claim a 6-2 home win over the San Jose Sharks.

That win snapped a two-game losing skid for a club that boasts a 3-6-0 record since a five-game winning streak.

“I definitely saw a sense of urgency from our team,” coach Jeff Blashill said. “We (were able to) take the game to them a little bit. We didn’t give them much space at all. I thought we battled hard. We competed from a physical standpoint.”

The Red Wings are in the mix for a wild-card spot deep into a season when many pegged them to be bottom-feeders.

And now, one player in particular may have some extra jump. Forward Filip Zadina, the sixth overall pick in 2018, was a healthy scratch against the Sharks, and had no problem voicing his displeasure. Not only has the talented right winger failed to score in nine games, he’s managed just one goal and three points in the last 14 outings.

“Obviously, I was frustrated because I had a lot of chances and didn’t score,” said Zadina, who has four goals and 10 points in 32 games. “The COVID break and stuff like that kind of pushed me down. I had good practice and a good workout, and I just feel way better.”