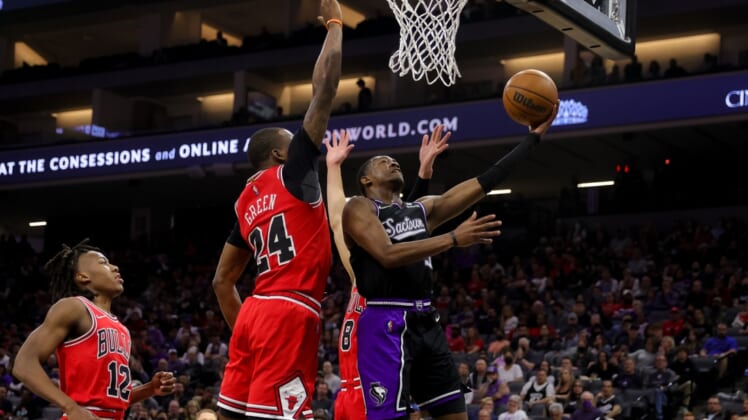 De’Aaron Fox recorded 34 points, six rebounds and six assists and the Sacramento Kings halted a four-game losing streak with a solid 112-103 victory over the visiting Chicago Bulls on Monday night.

Zach LaVine registered 27 points and six assists and Nikola Vucevic contributed 23 points and 10 rebounds for Chicago, which fell for the sixth time in its past eight contests. DeMar DeRozan had 21 points, seven rebounds and six assists, and Coby White added 13 points for the Bulls.

Sacramento made 47.6 percent of its attempts and was 10 of 25 from behind the arc.

Mitchell hit a jumper to start the fourth quarter to give the Kings a 90-77 lead.

But DeRozan scored seven points during a 12-0 run as Chicago crept within one with 8:17 remaining.

Sacramento pushed its lead out to 96-89 on DiVincenzo’s 3-pointer with 6:27 left. Chicago moved within four on three occasions before baskets by Barnes and Fox and two free throws from Sabonis gave the Kings a 106-96 lead with 1:54 to play.

LaVine later scored five straight points to bring the Bulls within 108-103, but Fox made two free throws with 36.5 seconds left and DiVincenzo sank two with 24.5 seconds to play as the Kings finished off an impressive performance.

Sacramento used a 13-0 run in the first quarter to open up a 10-point lead and never trailed again.

The Kings’ lead reached 21 late in the second quarter before they settled for a 63-43 halftime lead. Fox had 16 in the half and Sabonis tallied 14.

The Bulls used a 20-7 spurt in the third quarter to move within 70-63 on Vucevic’s 3-pointer with 6:20 left. But the Kings scored the next five points and eventually took an 88-77 advantage into the final quarter.