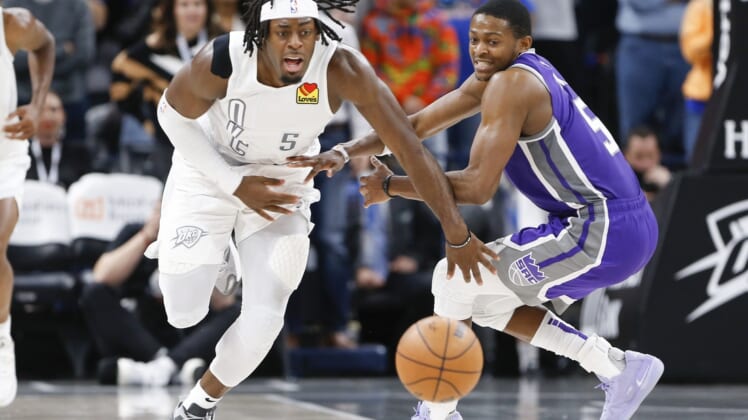 Alvin Gentry’s first game back on the Sacramento bench after a COVID-19 related absence was an utter disaster.

The Kings look to put forth a better effort and bounce back from a home-court whipping when they host the suddenly hot Oklahoma City Thunder on Tuesday night.

Sacramento was outscored 78-52 in the second half by the Memphis Grizzlies on Sunday night when it lost 127-102. The Kings trailed by as many as 30 points and Gentry was livid after the rout.

“It’s the most disappointed I’ve been in 34 years in the NBA, I can honestly say that,” said the 67-year-old Gentry, who is Sacramento’s interim coach. “That performance was absolutely ridiculous. We didn’t play hard, we didn’t compete. We didn’t guard the ball; we didn’t guard screen and rolls. We didn’t follow the game plan. No competitiveness whatsoever.

“They basically toyed with us. I’m totally disappointed and everybody in this building should be disappointed.”

Sacramento has dropped three consecutive games and seven of its past nine. The Kings were hoping to make up some ground on a six-game homestand but instead have started it with losses to the Los Angeles Clippers by 16 points and the Grizzlies by 25.

Playing at home has been a problem all season as Sacramento has a mediocre 7-11 mark in the Golden 1 Center.

Guard Terence Davis said opposing clubs arrive and have no fear of the Kings.

Sacramento point guard De’Aaron Fox returned from a four-game absence due to COVID-19 protocols and had 12 points and five assists in 30 minutes. But he also committed seven turnovers, one shy of his career worst.

They are beginning a short back-to-back road trip with games against the Kings and Phoenix Suns. Oklahoma City lost at Phoenix 113-101 last Thursday for its only setback during the current run of success.

Shai Gilgeous-Alexander scored 31 points against New Orleans and is averaging 27.5 over the past four games. He is averaging 25.9 points in December.

Second-round draft pick Aaron Wiggins was a surprise contributor with a career-best 24 points on 8-of-10 shooting. His previous season high was six points.

“I just think I did a really good job of trying to find open spots,” Wiggins told reporters. “When I’m on the bench, when I’m not in the game, I watch those guys who are really good at playing off ball. I try to make sure when I’m on the court, I’m doing those little things that can help the team get going. My guys found me in open spots, and I was just trying to make plays.”

Thunder coach Mark Daigneault said the performance is a sign of Wiggins getting more comfortable as well as growing as a player.

“We’ve been trying to give him confidence and become an offensive player, but to do it inside the role that he’s in and inside the team, which is a hard balance,” Daigneault said. “This was the cumulative effect of a lot of development and a lot of process and growth for Aaron.”

Oklahoma City notched a 105-103 home win over the Kings on Nov. 12 when Luguentz Dort stole the ball from Fox and scored on a layup with 1.7 seconds left.