Kings fend off Heat for first win of season 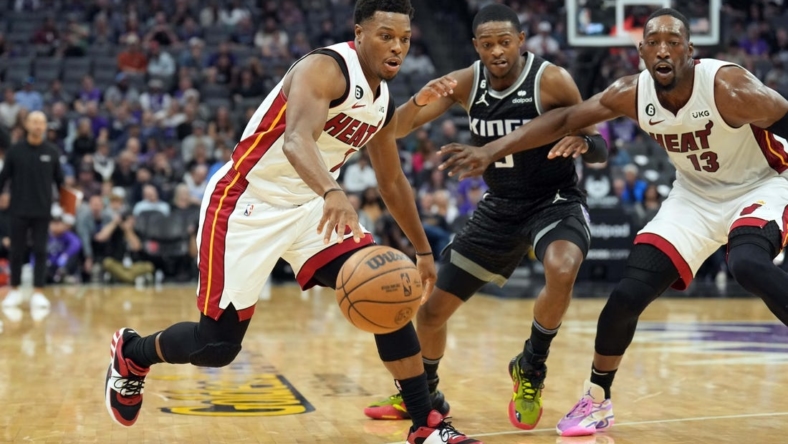 Domantas Sabonis scored all 18 of his points in the first half and the Sacramento Kings stunned the visiting Miami Heat 119-113 Saturday night for new coach Mike Brown’s first win at his new home.

Rookie Keegan Murray hit a key 3-pointer midway through the fourth quarter for the Kings.

Facing a Heat team playing for the third time in four nights on the road, the Kings ran off to a 71-49 halftime lead on the strength of 63.6 percent shooting and nine 3-pointers. Sabonis hit eight of his nine shots in the half.

Seeking a winning trip after a win at Portland and a loss at Golden State, the Heat rallied within six in the third period, then as close as 101-100 at the end of a 12-point flurry with 6:15 to go. Tyler Herro bombed in a pair of 3-pointers and Jimmy Butler had a three-point play in the run.

But Murray stopped the bleeding with a 3-pointer, then added two free throws to kick off a 6-0 run that re-established an eight-point cushion with 4:12 remaining.

Miami clawed within 117-113 on a Max Strus layup with still 54.1 seconds left, but 28 seconds later he misfired on a 3-pointer that could have made it a one-point game. Kevin Huerter’s two free throws with 14.2 seconds remaining iced it.

Huerter paced Sacramento with a season-best 27 points, all but four of which coming on 7-for-8 shooting from beyond the arc. He missed his career-high, set in 2019 for the Atlanta Hawks, by two points.

Making his second start, Murray finished with a season-best 22 points for the Kings, who had opened 0-4 in Brown’s first year at their helm.

De’Aaron Fox (17), Harrison Barnes (11) and Trey Lyles (10) also scored in double figures for Sacramento, which outshot the visitors 55.3 percent to 42.7 percent. Fox completed a double-double with a game-high 13 rebounds.

Coming off a seven-point night at Golden State, Herro led all scorers for the Heat with 34 points. He shot 13-for-22 overall and 5-for-8 on 3-pointers.

Bam Adebayo chipped in with 23 points for Miami, while Kyle Lowry went for 15 points and Strus 11. Butler added 13 to complement a team-high seven rebounds and a game-high-tying six assists.