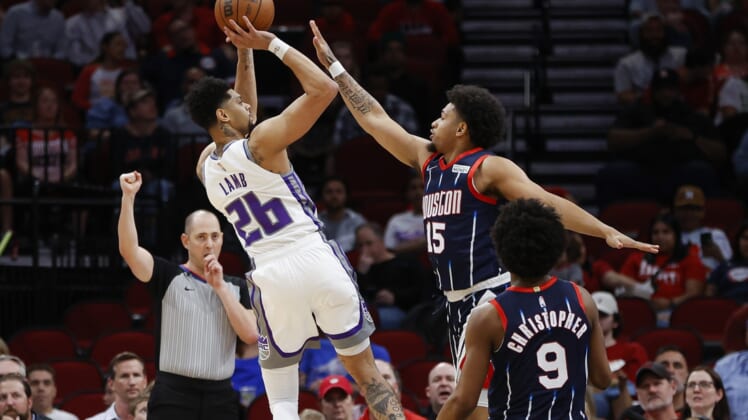 The Kings swept both meetings between the teams this week on the road, rallying from a 19-point deficit in the finale after eking out a 121-118 win Wednesday. They seized control with a 21-4 run in the fourth quarter, claiming a 115-104 lead on a Metu dunk with 2:13 to play.

Jones posted 17 points and 17 rebounds while blocking six shots, and Metu added 18 points and 13 rebounds off the bench. Donte DiVincenzo scored 19 in reserve for the Kings (29-49).

Porter’s 3-pointer with 32.6 seconds left pulled Houston within 120-117. DiVincenzo answered with a 16-footer with 13.8 seconds left to seal the victory.

Garrison Mathews scored 22 points and matched his career high of six 3-pointers for the Rockets (20-58). Green also made six 3-pointers and finished 9 of 9 from the free-throw line.

Sacramento has won four of its past five games while Houston has lost three in a row.

After Houston extended its five-point halftime lead to 87-75 late in the third, the Kings used a 9-0 run to pull back into contention. Jones’ tip-in just prior to the buzzer cut the deficit to five entering the fourth, a period the Kings opened with an 8-0 blitz keyed by a pair of Metu treys.

Trailing 94-91, the Rockets answered with a 9-0 spurt fueled by a Green 3-pointer and two free throws. But their offense suddenly cooled and Sacramento rolled to capture the season series 3-1.

Houston led 39-20 after a Green 3-pointer at the 2:12 mark of the first as the Rockets hit six treys in the frame.

By the 4:31 mark of the second quarter, that advantage was gone with Sacramento turning a 12-0 run into a 47-47 deadlock. Jones delivered a three-point play during the surge. The Kings pulled even on a Josh Jackson 3-pointer before Houston reclaimed control and led 62-57 at the half, buoyed by Mathews’ 19 points.