Kings capitalize on late gaffe to edge Oilers in Game 1 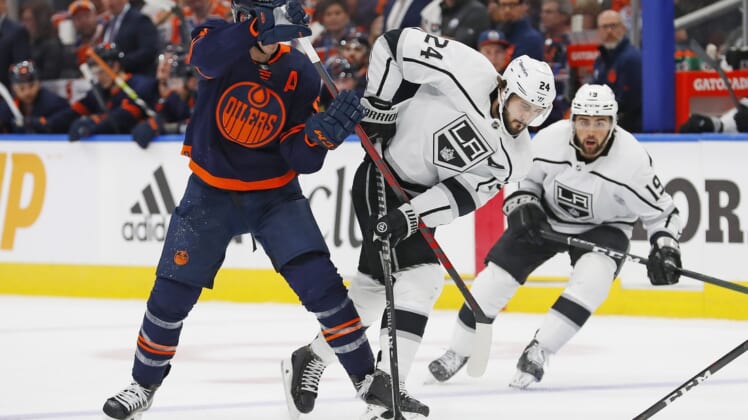 Phillip Danault scored the game-winning goal late in the third period to cap a two-point night and led the visiting Los Angeles Kings to a 4-3 victory over the Edmonton Oilers on Monday in the opener of their Western Conference first-round series.

Trevor Moore scored once in a three-point game for the Kings, while Alex Iaffalo collected one goal and one assist and Brendan Lemieux scored once. Goaltender Jonathan Quick made 36 saves.

Connor McDavid and Kailer Yamamoto both netted one goal and one assist for the Oilers. Leon Draisaitl also scored, and goalie Mike Smith stopped 31 shots but gaffed on the winning goal.

With overtime starting to loom, Danault broke a deadlock with 5:14 remaining. A flurry created when Smith misplayed the puck ended when Danault deflected Sean Durzi’s point shot for the winner.

The Oilers pushed frantically for the equalizer, but couldn’t find it.

Game 2 of the best-of-seven series will be Wednesday in Edmonton.

The Kings — who were without 20-goal scorer Viktor Arvidsson — staked a 2-0 first-period lead. Moore opened the scoring at 11:00 with a one-timer from the slot. Moore then sent a seeing-eye pass, firing it backwards as he was heading around the net, that Iafallo converted at 16:48.

McDavid, the regular-season scoring champ, provided a great individual effort to put his team on the board with 41.5 seconds remaining in the opening period. Yamamoto tied the game when he deflected a point shot for a power-play marker 2:39 into the second period.

Lemieux, who dressed for Arvidsson, restored the Los Angeles lead 71 seconds later when he found the mark after receiving a drop pass on an odd-man rush. But Draisaitl was given all kinds of time to respond with another power-play goal, a top-corner snipe, before the midway point of the second period.

The Oilers have lost four straight playoff games in which McDavid and Draisaitl each scored in the same contest, according to Sportsnet in Canada.