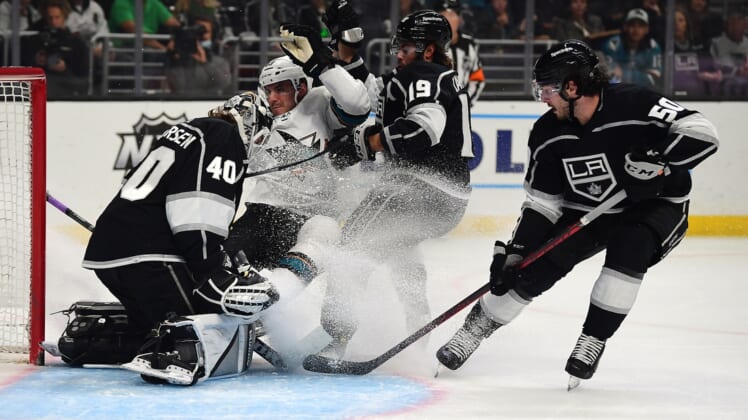 Cal Petersen made 29 saves and the Los Angeles Kings avoided a season sweep by the visiting San Jose Sharks with a 3-0 win on Thursday.

It was the second shutout in the past four games and third overall this season for Petersen, who came in with one win in his previous six starts against the Sharks.

Anze Kopitar, Phillip Danault and Adrian Kempe scored, and Sean Durzi had two assists for the Kings, who had lost the previous three meetings against the Sharks this season and nine of 11 over the past two years.

James Reimer made 24 saves for the Sharks, who were trying to earn at least a point in five straight games for the first time this season.

Durzi sent a pass to Kopitar at the opposite point, and Kopitar skated to the top of the right circle before scoring his 16th goal of the season — a wrist shot at 6:57.

Kopitar had not tallied a point in the previous six games.

Coming out of a television timeout, Danault won a faceoff in the San Jose zone and Durzi took a shot from the right point. Reimer gave up a long rebound, and Danault was in position to sweep the puck into the net while sliding on his knees. That gave the Kings a 2-0 lead at 16:27.

Petersen made his best save on a short-handed breakaway by Tomas Hertl with 1:13 left in the second period. Hertl nearly scored short-handed again at 5:22 of the third, but he was turned away by Petersen again.

Kempe ended a 10-game drought without a point when he scored his team-leading 26th goal of the season into an empty net with 2:57 left.

Neither the Sharks nor Kings have swept each other in a season series. Before this season, the closest was 2003-04, when the Sharks went 5-0-1 against Los Angeles.