Kings’ Anze Kopitar gets goal, assist and win vs. Jets in 1,200th game 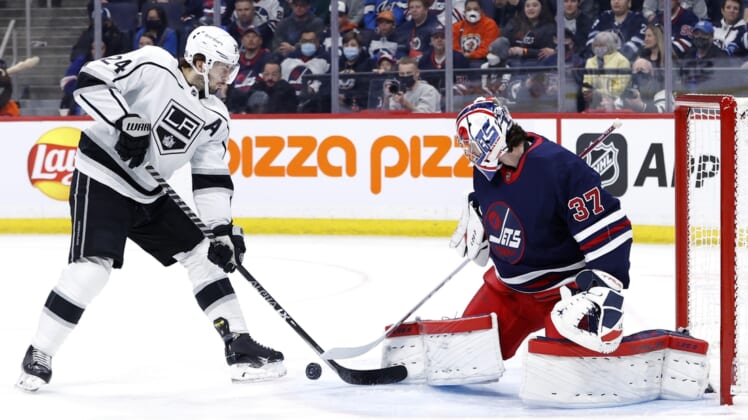 Anze Kopitar and Adrian Kempe each had a goal with an assist, and the visiting Los Angeles Kings continued a month-long stretch of strong play with their 3-2 win over the Winnipeg Jets on Saturday night.

Playing in his 1,200th career regular-season game, Kopitar scored the tiebreaking goal — with help from Kempe — just after the midway point of the first period, and the Kings never relinquished the lead. Gabriel Vilardi also scored and Cal Petersen made 25 saves as Los Angeles, in position to make its first playoff appearance since 2018, improved to 9-4-3 since March 4.

Nikolaj Ehlers recorded his 22nd goal and Adam Lowry also scored for Winnipeg, which is trying to move into playoff position in the Western Conference. Connor Hellebuyck stopped 35 shots for the Jets, who have dropped back-to-back games in regulation for the first time since Feb. 19 and 21 — and following an 11-4-1 stretch.

Los Angeles struck first, while short-handed, just 2:21 into the game. With control of the puck and streaking down near boards, Phillip Danault threw the puck on net, and Kempe corralled the rebound, then slipped it by Hellebuyck for his 29th of the season.

Ehlers, though, tied things 6:24 into the opening period. After a Los Angeles turnover, Mark Scheifele gained control of the puck and found Ehlers, who converted his eighth goal in 11 games.

But after a Jets turnover in their own zone, Kopitar came through with 9:28 left in the first. Los Angeles pushed its lead to 3-1 through Vilardi, who was credited with a power-play goal — 3:05 into the second period — after getting a piece of Jordan Spence’s shot before it went in off the skate of Winnipeg defenseman Josh Morrisey.

The Jets got back within a goal with 6:29 to play in the middle frame when Lowry tapped home a bouncing rebound. Winnipeg pushed hard in the third period, but was unable to tie the contest, went 0-for-6 on the power play for the night and lost to Los Angeles for the first time in three 2021-22 tries.