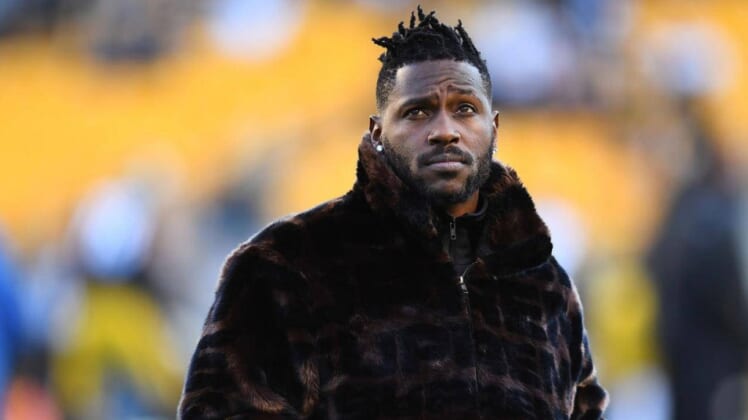 Antonio Brown will bring his talent to the Raiders.

National columnist Peter King wrote in his weekly column the Raiders make the most sense as a landing spot for the Steelers talented but controversial wide receiver Antonio Brown.

One of the storylines around the Raiders coming out of the NFL Combine this past week had nothing to do with workouts or college players. Instead, the ongoing saga of Steelers wide receiver Antonio Brown made headlines and was the topic of heavy conversation in Indianapolis this weekend.

In his popular Monday column Football Morning in America, longtime NFL columnist Peter King said Brown makes the most sense to land with the silver and black.

“The Raiders make the most sense,” King wrote. “They have the ammo, with overall picks 4, 24, 27 and 35, and Jon Gruden needs a deep threat the way he needs oxygen. They have $72.9 million in cap room, according to Over The Cap.”

King’s view is predicated on Raiders coach, and new GM Mike Mayock, being able to restructure Brown’s current contract perhaps loading up on money in 2020 when the team gets to Las Vegas.

Even at 31 Brown is consistent on the field and a hard worker off it.

“And if Jon Gruden is willing to re-do Brown’s contract after this season to add significant guaranteed money in 2020,” King continued. “Brown could be the three/four-year weapon to key the Oakland offense.”

King did reassert he feels Brown will play in 2019 on his existing contract which would include $15 million in salary and bonuses. He surmised if Brown is focused and not a distraction in his new role with the Raiders, he could then get a new contract from Mayock and Gruden. If Brown isn’t willing to play under his old deal, then it would most likely kill his chances of playing in Oakland this year and Las Vegas in 2020.

“Brown to the Raiders for the 27th pick (the Amari Cooper pick from Dallas, ironically) sounds about right to me,” King said.

It’s hard not to like the thought of a Derek Carr-to-Brown connection and what it would do for the Raiders offense in dire need of weapons. He’s been as consistent a receiver there is in the league and there’s no denying his production and talent even at 31 years old. The biggest question is can he stay happy with a new team?

If he can convince Gruden and Mayock he can, it might just become a reality.

What do you think? Would you support the Raiders trading their 27th pick in the first round (acquired in the Amari Cooper deal with Dallas) to acquire Antonio Brown?

Would you support the #Raiders trading the 27th overall pick in the 2019 #NFLDraft for @AB84?