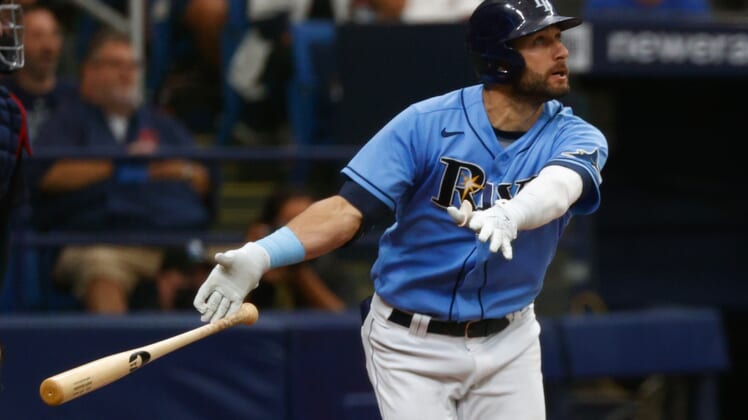 Kevin Kiermaier crushed a three-run homer and collected five RBIs as the Tampa Bay Rays extended the visiting Cleveland Indians’ season-high losing streak to eight games with an 8-1 victory in Game 1 of a doubleheader on Wednesday at St. Petersburg, Fla.

Kiermaier also delivered a two-run double in the first inning that scored Vidal Brujan, who lined an RBI single in his first major league at-bat for Tampa Bay, which has won three straight games.

Brandon Lowe clubbed his career-high 18th homer and Michael Wacha (2-2) allowed only Franmil Reyes’ second-inning solo home run, plus three other hits while striking out six without a walk in six innings of the seven-inning contest.

Those were the only hits Cleveland managed. They Indians struck out eight times while remaining winless since beating Detroit on June 28.

With two on and two out in the bottom of the first, Brujan hit a line drive to right field off J.C. Mejia (1-4), scoring Joey Wendle with the game’s first run. Brujan also recorded his first stolen base later in the inning, and came home on Kiermaier’s two-run double for a 3-0 Rays’ lead.

Reyes made it a 3-1 game in the second by homering for a second consecutive contest. But Kiermaier’s three-run, two-out homer in the third chased Mejia and broke the contest open.

All six runs Mejia allowed were earned, in addition to the four hits and two walks yielded over just 2 2/3 innings. Cleveland pitchers have allowed 74 runs while losing 10 of the last 11.

Solo homers from Lowe in the fourth and Brett Phillips in the sixth added some insurance. Both home runs also came with two outs for the Rays, who have won 18 of their last 22 at home.

The Indians announced Wednesday that outfielder Eddie Rosario was placed on the 10-day injured list with an abdominal strain.