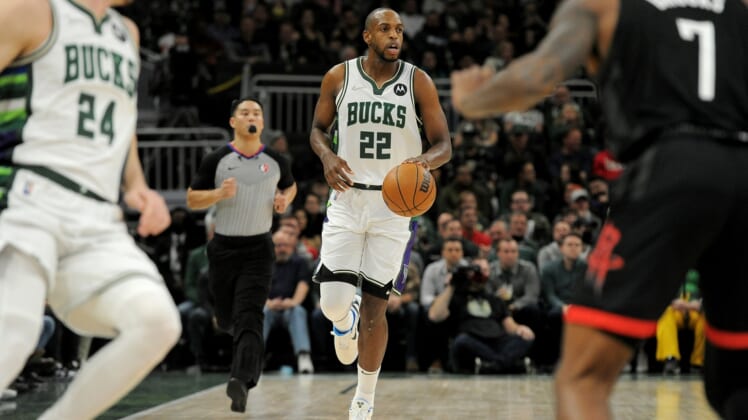 Khris Middleton eclipsed 20 points for the eighth time in his last nine games as the Milwaukee Bucks took down the visiting Houston Rockets 126-106 on Wednesday night.

Middleton had missed the last three games with a hyperextended knee but was strong in his return, posting 23 points on 7-of-17 shooting to help snap a two-game losing skid. Jrue Holiday paced the Bucks with 24 points and 10 assists, and DeMarcus Cousins and Jordon Nwora each chipped in 18 points.

Milwaukee’s offense took off after the first 12 minutes of action, pouring in 101 points over the final three quarters. The Bucks made 17 3-pointers on the night.

Jae’Sean Tate was held to just four points on 2-of-10 shooting after scoring in double figures in his last five games.

A 38-point second quarter that was headlined by a 16-0 run sent the Bucks into the break with a 63-50 lead. The Rockets once trailed by 16 and had brought things within eight, but Wesley Matthews hit three shots from distance in a 66-second span to help maintain a comfortable edge.

Houston stayed within striking distance thanks to 18 trips to the foul line in the first half and Wood, who scored 14 points.

After the Bucks pushed the lead to 19 at the front end of the third quarter, the Rockets fought back to bring themselves within 11 thanks to a dunk from Wood and threes from Garrison Matthews and Gordon.

That would be the closest Houston would get for the remainder of the game.

Wood got off to a fast start, collecting 10 points and four rebounds in the first quarter. However, the Bucks had a 25-24 lead at the end of the quarter despite making just two of 11 3-point attempts and committing seven fouls.