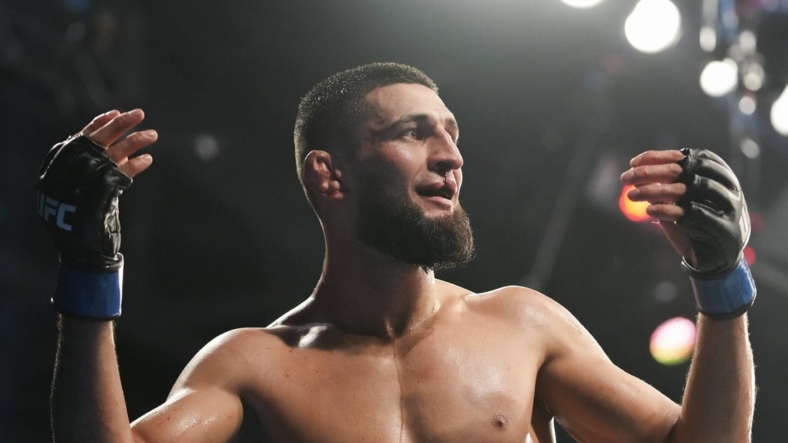 A main event that one participant claims he didn’t want will headline Saturday night’s UFC 279 in Las Vegas.

The welterweight match at T-Mobile Arena will feature rising superstar Khamzat Chimaev (11-0) against longtime fan favorite Nate Diaz (21-13) in an old-school-style booking in which the promotion obviously hopes the newcomer makes the final jump to stardom off the name value of his veteran foe.

Chimaev, of Stockholm, Sweden, by way of Chechnya, has been on an incredible run in UFC, winning all five of his fights. The first four were sudden and authoritative finishes, and the fifth, at UFC 273, was a barnburner of a decision win over Gilbert Burns that will place high on the list for 2022 Fights of the Year.

Diaz, of Stockton, Calif., has been with UFC since 2007. And while he’s never held a title, he’s wildly popular for his willingness to take on all comers and engage in exciting fights, most memorably in a high-profile pair of bouts with Conor McGregor, during which each fighter won one apiece.

But Diaz has dropped three of his past four and is entering the final fight of his UFC contract.

After months of haggling with UFC over a potential foe, Diaz accepted Chimaev’s challenge.

“What they got me doing right now is they’re acting like I called for this fight, which I didn’t call for, and I don’t want, and didn’t want, and still don’t want, but I don’t give a (expletive),” Diaz told ESPN. “I’ll fight anybody.”

At a Wednesday media day, Chimaev, in a nod to the rancor between his opponent and the promotion, said he hopes Diaz brings the style of fight for which he’s been long known, regardless of the circumstances.

“I hope he can survive five rounds,” Chimaev said. “It’s good for him. Show his heart and go away from the UFC being a warrior. If I beat him first round, everyone is going to say the guy is too old and ‘Uncle Diaz is going to have to go home.'”