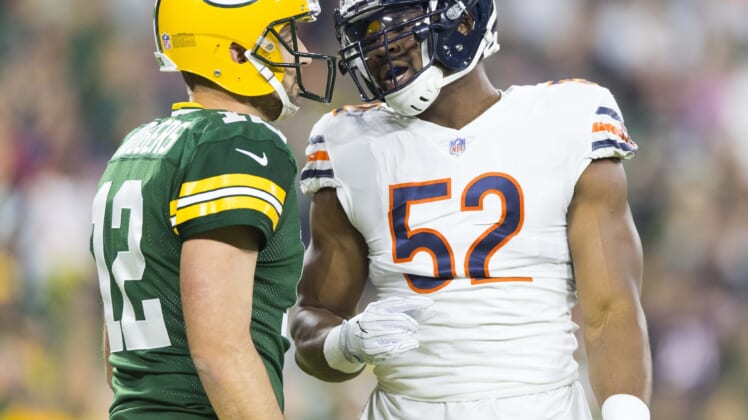 Through just the first four games of his Chicago Bears career, Defensive Player of the Year candidate Khalil Mack has already made his name known in the Windy City.

Seen as the face of the franchise, Mack is taking a liking to the city in a big way. Sure it helps that he’s put up five sacks and four forced fumbles through the first quarter of the season. But Mack’s presence on the Bears has changed the entire dynamic for this long-downtrodden franchise.

Meanwhile, Mack’s former stomping grounds of Oakland isn’t in anywhere near the same situation. On the verge of losing their Raiders to Las Vegas, fans in Northern California have not taken a liking to Jon Gruden trading Mack. And for his part, Gruden hasn’t done himself any favors with some absolutely ridiculous quotes.

In talking about Bears fans and their passion for football, Mack himself pretty much threw a parting shot in the direction of Raider Nation. He did so without even mentioning the Silver and Black faithful.

Bears OLB Khalil Mack admits it's a different animal playing in Chicago in terms of the fan base and his celebrity. An "aggressive" fan base "in a good way". Says he feels and appreciates the "importance" of the Bears to the area.

Man, why kick them when they are down? That’s akin to Mack stomping on a quarterback after taking him to the ground for a sack.

Known to have a passionate fan base of their own, the Raiders are in the midst of a horrible 1-4 start to their season. The backdrop here being a move to Las Vegas in 2020 and a potential short-term relocation from Oakland as early as the 2019 campaign.

Yeah, things could be a bit better for Raider Nation right now. But hey, at least they have nine more seasons to Gruden to look forward to. Vegas happy hour couldn’t come soon enough.