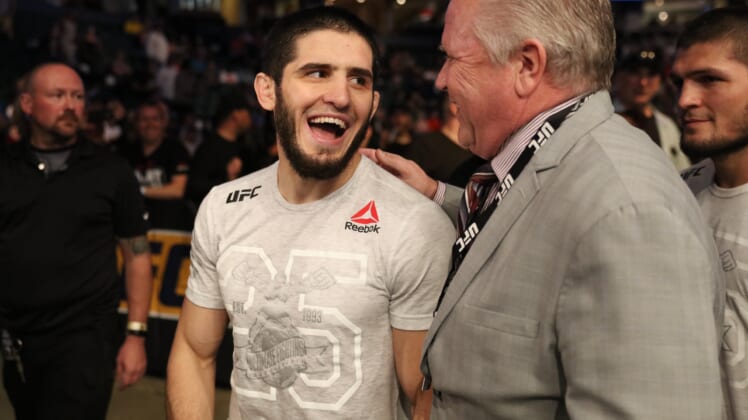 Retired UFC lightweight GOAT Khabib Nurmagomedov believes his friend and pupil Islam Makhachev is the most complete fighter in the promotion. Even more than pound-for-pound champions Israel Adesanya and Alexander Volkanovski.

It is no surprise that Nurmagomedov, 33, is a big fan of the talented lightweight. Makhachev has been a training partner and close friend throughout Nurmagomedov’s journey to becoming the greatest 155-pound fighter in mixed martial arts history. Now that the Russian sports icon is retired and serves as one of his friend’s primary coaches, he also wants to see Makhachev achieve similar success.

To some, Makhachev’s 10-fight win streak in the Octagon has made him a worthy participant in a planned vacant lightweight title bout against former division king Charles Oliveira. However, the UFC seems in no rush to book the fight, and Oliveira recently suggested Makhachev should beat fellow lightweight contender Beneil Dariush first. Nurmagomedov doesn’t see it that way.

In his mind, the fellow native of Dagestan is not only deserving of a title opportunity because of his success in the UFC, but because he is one of the most complete fighters in the sport. Even more so than featherweight champion Alexander Volkanovski and middleweight king Israel Adesanya. The second and third-ranked fighters in the Sportnaut UFC pound for pound rankings.

“I feel Islam is the best lightweight in the world. Nobody can touch this guy. I talk about nobody can touch not as trash talk, this is true. When he fights, he grabs them, he holds them, he makes them tap, he punches them, he kicks, he does everything. He is the most complete fighter today in MMA,” Nurmagodmedov told TMZ Sports on Thursday. “Who is a more complete fighter than Islam? Charles Oliveira? He goes down every single fight.

“Like, Volkanovski, he doesn’t grapple like Islam. Adesanya. They all have some way [to win], but Islam has every way. Striking, punching, ground and pound, kicking, knees, clinch, grappling, everything. And I feel bad for him,” he continued. “People talk about me, but I’m finished. For ten years I was in UFC. I dominate everybody, I win the title, I defend it three times, okay I’m finished. Let’s leave me alone.”

During his conversation with TMZ, Nurmagomedov was asked if his pupil can surpass his own success in the UFC’s lightweight division. A notion the Russian admits is very possible with a few more important victories. 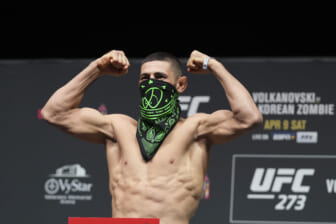 “Definitely it’s possible. Right now, this is a legacy fight for Islam. Why I really want him to fight Charles Oliveira is because he has a 10 [fight] win streak,” said Nurmagomedov. “And the UFC has never made this fight. An 11 [fight] win streak versus 10 [fight] win streak … If Islam beats Charles, and then he beats new blood from the younger generation, Beneil, and Islam beats three more fighters, Islam can become the greatest lightweight ever. He has this potential, he’s only 30-years-old. But UFC has to give him the chance.”

Khabib Nurmagomedov will put his promoter hat back on when his MMA organization Eagle FC puts on their 47th event on Friday, May 20. The event is headlined by UFC heavyweight great Junior dos Santos vs Jorgan De Castro.