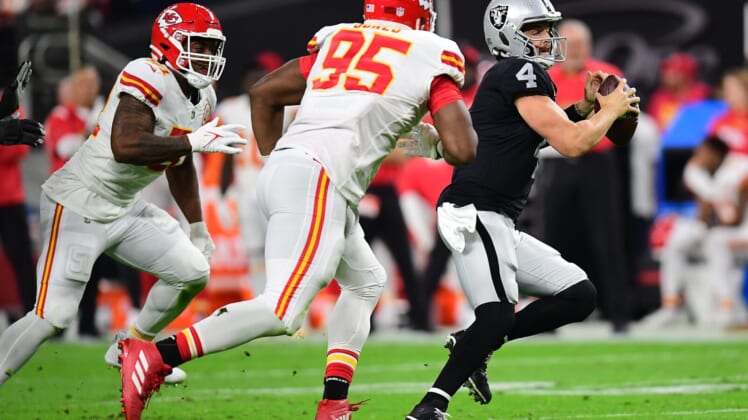 On Sunday, the Las Vegas Raiders go on the road to face the Kansas City Chiefs to complete the season series.

The game kicks off at 10 a.m. PST and will be televised on CBS.

Four weeks ago, Kansas City came into Allegiant Stadium and quarterback Patrick Mahomes threw for 406 yards and five touchdowns in a 41-14 Raiders loss.

Now, the Silver and Black look to get revenge against their AFC West foes in a rivalry that spans more than six decades.

Here are four keys to a Raiders win at Arrowhead Stadium:

Last month against the Raiders:

Keeping these two covered will be key for the Raiders’ defense.

Mahomes is a player that is going to extend plays with his feet and throw from unusual angles that a normal quarterback would.

Defensive coordinator Gus Bradley said it will take a perfect defensive performance to stop the Chiefs this time around.

“They’ve got quite a lot of speed on the field at all times,” Bradley said. “I didn’t think we played real fast, reaction-wise to them the first time. There’s some things we’ve got to improve on and have some more awareness and execution. I thought there were times we executed well, but against this team, you’ve got to execute all the time.”

Execute on third downs & in the red zone

Through 12 games, one of the themes to the 2021 season for the Raiders have been losing on third downs, both offensively and defensively.

Linebacker KJ Wright, who has recorded 32 total tackles across five starts in 12 games this season, said the team needs to believe in succeeding in the final five games in all facets of the game, including on third down.

“So, we can go anyway we want to. That’s the beauty of this. I believe the message that will spread amongst the guys is that we can do this and get it done.”

Offensively, the Raiders need to convert on third downs anyway it can, whether it comes from quarterback Derek Carr scrambling or a receiver making the extra effort to get open to extend drives

Offensive coordinator Greg Olson said the offensive unit needs to limit the mistakes and focus on completing plays the best it can.

“I can say there have been a number of issues, whether it be a protection breakdown, it might be a missed read or maybe the design of the play,” Olson said. “We look at it every week on a daily basis and obviously that’s an area we don’t feel good about. So those are constant emphasis from within the staff and those days we work on those situations.”

When it comes to executing in the red zone, the Raiders need to get touchdowns, especially against a Chiefs team that has won five in a row and has only allowed 11 points to opponents during that stretch.

Carr has an undefeated record for a certain statistic this season. When the 30-year-old throws for more than 300 yards in a game, the Raiders are 6-0.

On the flip side, however, it is the opposite record.

One of the keys to getting Carr over 300 yards will be based on having open looks from the receivers, such as Hunter Renfrow.

Through Renfrow’s first 10 games this season, he has averaged 5.6 receptions for 52.4 yards. Those numbers have increased over the last two games as Renfrow has reached over eight receptions and 100 receiving yards in both games.

Carr said the connection with Renfrow continues to grow, especially against Dallas and Washington.

“The level of communication that we have is very high-level,” Carr said. “For me to go to him and be like, ‘hey, I need you to do it just like this’ and it’s another thing for him to say OK and actually see it the same way on the field and do it. He does it exactly how I need it to do it. So, the trust is super high and the execution. It’s one thing to do it, but I’m throwing it and he’s making great plays.”

During the course of the Raiders franchise, they have heavily relied on their specialists.

From punters Ray Guy and Shane Lechler to kicker Sebastian Janikowski, the current specialists feel they are on the same track after punter AJ Cole and kicker Daniel Carlson signed contract extensions earlier this week.

“The Raiders have such a rich history at the specialists position, so punting and kicking here means a little bit more than just about anywhere else,” Cole said. “It definitely means a lot that they’ve invested in us, believed in us and are thankful for the work we’ve done and will continue to do. We’re just excited to be here and hopefully stick around for a long time.”

Sieg was rehabbing an ankle injury since the preseason and also landed on the COVID-19 reserve list a couple weeks ago.

Cole said long snapper Carson Tinker, who filled in while Sieg was sidelined, met expectations and can’t wait for Sieg to join him and Carlson on the field again.

“Every single play we’re out there and Trent starts, we have so much trust and confidence in him and it’s good to get back in rhythm,” Cole said. “I think Carson Tinker did a great job stepping in for us. Shout out to him for stepping up to the plate when he was called on.

“We’re really excited to have Trent back. We’ve been working together for three years. Been through some highs, been throughs some lows. So, we just have so much confidence in each other when we go out on fourth down, or whatever the situation is. It felt good to be back in our normal rhythm. We have some many reps logged.”

When it comes to punting, it’s more than a player kicking the ball away. Weather implications, ball placement, how you punt the ball and where the defense wants to start all comes into play.

Bradley said Cole has been a force in setting up opponents deep in their own red zone or switching momentum in a game.

“Every game when you can control field position and there’s multiple times when we’ve started our drive, when they’re in a backed-up situation and it changes,” Bradley said. “As the field goes, as you look at the length of field personalities, offensive coordinators change, based on where they are in the field. He’s been tremendous in that part. He’s definitely a weapon.”