Keylan Boone leads Oklahoma State to upset over No. 14 Texas 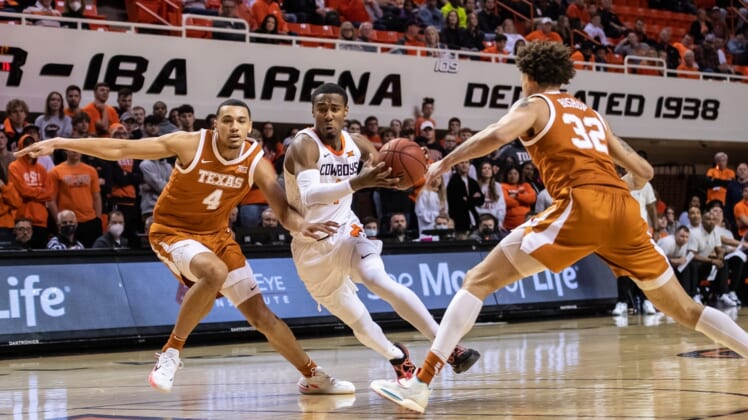 Keylan Boone poured in a career-high 17 points that included two key 3-pointers down the stretch as Oklahoma State defeated visiting No. 14 Texas 64-51 on Saturday afternoon in Big 12 Conference play in Stillwater, Okla.

The Cowboys (8-5, 1-1 Big 12) never trailed in the game, led by two points at halftime and by seven after a 3-pointer by Boone with 2:41 to play. Oklahoma State then added to its advantage with two free throws by Bryce Williams with 2:04 left before Boone all but cemented the victory with another jumper from beyond the arc with 1:27 remaining.

Williams added 11 points for the Cowboys. Oklahoma State was 16 of 23 from the free-throw line while Texas had just seven attempts, sinking five.

Timmy Allen and Andrew Jones led Texas (12-3, 2-1) with 10 points each. The Longhorns played without Tre Mitchell, their third-leading scorer, who was held out because of COVID health and safety protocol.

The Cowboys ruled the first half, scoring the game’s first six points and forcing seven Texas turnovers in the first eight minutes, one more than the Longhorns had in the entire game in their win Tuesday at Kansas State. Every good look at the basket came at a premium, and nearly every pass was contested as Oklahoma State built a 26-17 lead on Boone’s 3-pointer at the 5:32 mark.

Texas fought back, pulling to within two points at the break when Devin Askew canned a 3-pointer with 52 seconds left in the half. The Longhorns kept it close by shooting 50 percent from the floor in the first half and forging a 17-12 rebounding edge.

Boone paced all scorers with 11 points in the half. The Longhorns had eight players score over the first 20 minutes, led by Courtney Ramey’s six points. Texas did not shoot a free throw in the first half for the second consecutive game.

The Cowboys missed six of their first seven shots of the second half but still were able to extend their lead to 40-35 after a pair of free throws by Isaac Likekele with 13:01 remaining.