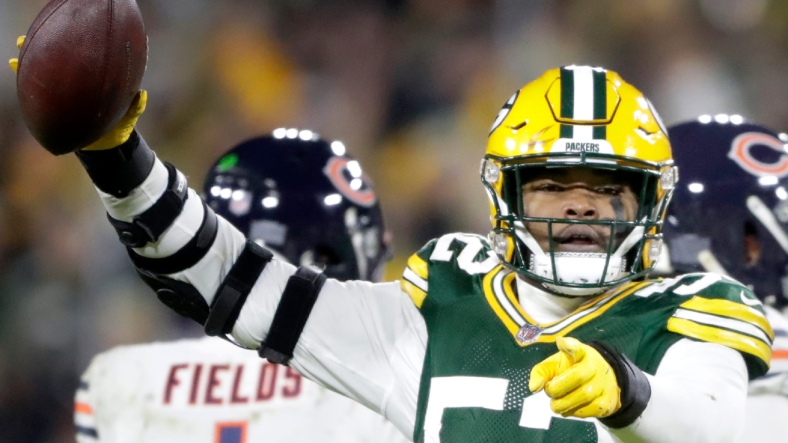 The Green Bay Packers are looking to get back on track on Sunday against the arch-rival Chicago Bears. The Packers have dominated the Bears in the Aaron Rodgers era, winning 22 of the last 27 meetings and 10 of the last 11.

After Green Bay’s poor performance on Sunday in Minnesota, Green Bay is in must-win mode. Remember, the Packers will travel to face Tom Brady and the Tampa Bay Buccaneers in Week 3. The Packers need to take care of business against beatable teams. Despite upsetting the San Francisco 49ers last week, Chicago is a very beatable team.

Here are three key players to watch for the Packers on Sunday Night Football against their oldest rival.

Christian Watson is an obvious X-factor and bounce-back candidate. Much has been made this week about his crucial drop on the first offensive play of the game for Green Bay that would have been a 75-yard shoe-in score. You can bet that Aaron Rodgers is going to go right back to the former North Dakota State star. No. 12 is a true leader that strives to make those around him better.

The question is how Watson will respond? His 4.3 speed is very real, and coach Matt LaFleur will look to utilize it. Watson will have a lot of opportunities to get back on track, whether it is on jet sweeps or on fly routes. Look for No. 9 to respond in a big way and have a much better performance in primetime as he looks to put Week 1 behind him.

Rashan Gary needs to keep the pressure on Justin Fields

Rashan Gary was one of the few Green Bay defenders last Sunday in Minnesota that played well. He recorded a sack, seven tackles, and two QB hits. Through his first three seasons, the former Michigan star has increased his numbers in every major defensive category (tackles, sacks, pressures, QB hits, hurries, knockdowns, and tackles for loss). Gary just needs to contnue to be consistent and raise his game.

A rivalry game against your oldest foe in front of the entire world on Sunday night has to be the type of game where Gary produces. Look for the Defensive Player of the Year candidate and that Green Bay pass-rush to get after it against a young Bears offense as they look to fluster the inexperienced Justin Fields.

Amari Rodgers needs to get involved in the offense

Amari Rodgers did not necessarily make an impact against the Vikings, at least from an offensive standpoint. The second-year receiver logged zero offensive snaps. He did have a 14-yard kick return and 12-yard punt return, but that is it.

His quarterback Aaron Rodgers was asked this week about the lack of snaps for Amari Rodgers on Sunday. “Yeah, he’s returning for us right now. That’s all I got on that,” Rodgers stated.

There might have been a situation in practice where the former Clemson star was struggling to be a reliable option for his quarterback. It is hard to say. But, if Amari can log in a solid week of practice and earn some offensive snaps on Sunday night, keep an eye on him. At his best, he can be a faster, younger Randall Cobb in the slot. Or, he could even play running back. He is a versatile piece, but it will be interesting to see if he makes an impact on offense instead of strictly on special teams.

Related: Biggest Green Bay Packers weakness from 2021 was nowhere in sight in Week 1