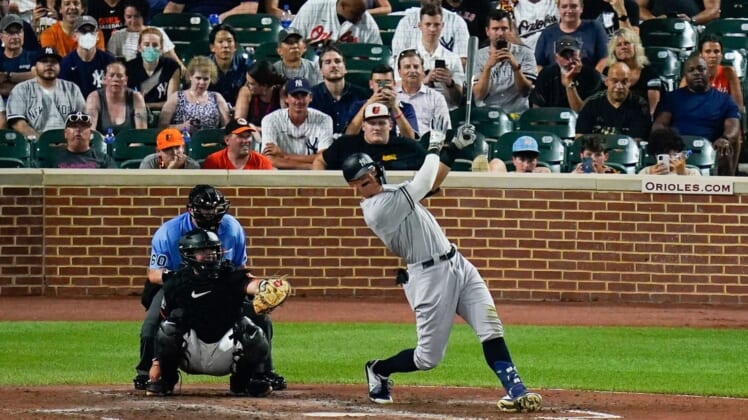 Aaron Judge and the New York Yankees will look to continue to feast on the Orioles on Saturday night when the American League East rivals play the second contest of their three-game series in Baltimore.

Judge went deep twice in the Yankees’ 7-6 win in the series opener on Friday to give him eight homers against the Orioles this season.

Judge hit his second three-run blast in as many days in the third inning and added a solo shot in the fifth to boost his major league-leading homer total 36 on the season.

“I was just happy to give ourselves the lead, and when we got a lead, this team is dangerous,” Judge said.

Judge has gone deep 34 times against Baltimore, the most against any team in his career. Friday’s power surge was just enough to send New York to its 10th win in 14 outings this season against the Orioles.

“What more can you say? He’s been the best player in the league,” Yankees manager Aaron Boone said. “(On Friday), the way he hit those balls, it’s just really impressive what he continues to do. A great play in center field that was timely. He’s doing a little bit of everything.”

Judge will aim to continue that complete performance on Saturday vs. Orioles starter Jordan Lyles (6-8, 4.76 ERA), against whom he is 2-for-11 with two homers in his career.

Isiah Kiner-Falefa had an RBI single to extend his hitting streak to 10 games for the Yankees, who boast an impressive 31-15 record within their division.

Baltimore, in turn, endured the familiar refrain of nearly overcoming a sizable deficit before dropping a one-run decision.

“I feel like the majority of our losses are like this,” Orioles manager Brandon Hyde said. “I’m just proud of our guys. We continue to fight and scrap and claw our way back into games that sometimes would get away from us in the past. Our dugout stays into it and we’re right there.”

Like Judge, Baltimore’s Anthony Santander has enjoyed success in the season series. He launched a three-run homer in the series opener to give him six of his team-leading 16 homers on the campaign against the Yankees.

Santander, however, is just 2-for-14 with five strikeouts against Saturday starter Gerrit Cole (9-2, 3.02).

Cole, 31, is 3-0 with a 3.12 ERA and 36 strikeouts in four starts in July. The right-hander owns a 5-2 record with a 2.11 ERA and 0.84 WHIP in nine career starts against Baltimore after splitting a pair of decisions against the club in May.

The bullpen is a different story after Michael King sustained an elbow injury in the eighth inning on Friday. After delivering an 0-2 slider to Baltimore’s Ramon Urias, King walked off the mound.

Fellow reliever Aroldis Chapman is 0-3 with a bloated 11.70 ERA in his past 13 games. The fireballer gave up the home run by Santander.

Lyles, 31, saw a two-start winning streak end after permitting six runs on as many hits — including two homers — in 2 2/3 innings of a 7-5 setback at the Tampa Bay Rays on Sunday.

The right-hander is 2-2 with a 4.18 ERA in six career appearances (five starts) vs. the Yankees.