Kevin Love calls out Team USA, Jerry Colangelo for throwing him under the bus in 2021 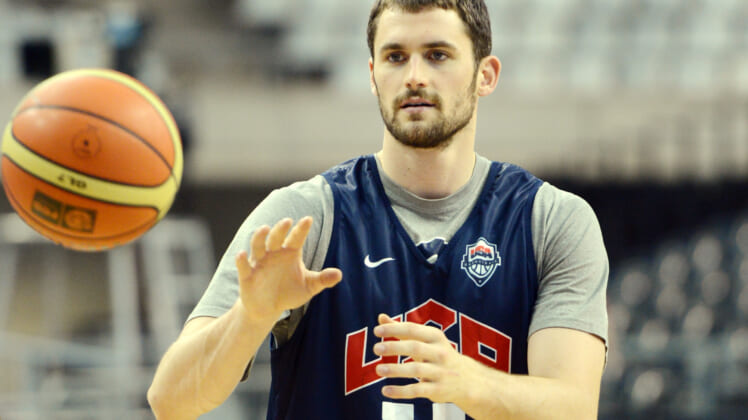 Before enjoying a bounceback 2021-’22 NBA season with the Cleveland Cavaliers, forward Kevin Love wanted to win a third gold medal with Team USA. Instead, the five-time All-Star learned that the organization never seemed to look out for him despite being part of the basketball fraternity.

Love was originally selected to Team USA’s 12-man roster in June 2021 for the Tokyo Olympics. However, the 6-foot-8 forward withdrew himself before leaving for Tokyo.

At the time, it was revealed that Love was still working his way back from a nagging calf injury that bothered him the previous NBA season. He made a decision that was in the best interest of his well-being, even if it hurt to talk away from an opportunity to win a medal with the U.S.

While most seemed to respect the decision, Team USA”s managing director Jerry Colangelo felt very differently. When asked why Love withdrew from the roster, Colangelo suggested it was because the NBA star wasn’t in playing shape that summer and questioned if Love had anything left in him.

“I didn’t think Kevin Love was going to play. I wasn’t even sure he had much left to play. He reached out to us and said he was in shape and said he felt he owed us. And on the basis of that, we’re looking at someone with international experience who at one time was a heck of a rebounder and could still shoot the ball. You know, being like a 12th man on a roster.”

Colangelo’s comments came at a time when Love wanted to get healthy so he could turn his NBA career around. As he explained on Uninterrupted’s The Shop in September 2021, it easily could have damaged his reputation for teams around the league.

Love proved Colangelo wrong this past season. He finished second in voting for the NBA’s Sixth Man of the Year award. The 33-year-old proved he still has plenty left in the tank and can make a meaningful impact for a contender.

Months later, in an interview with Bleacher Report, Love dove further into what happened with Team USA and shared how he feels Colangelo and others discarded him and damaged his reputation.

“People that I’ve had relationships with throughout USA basketball for that long, threw me under the bus. And I didn’t like that. I felt that I did the right thing by coming to the landing spot and landing point that I eventually got to. I just thought it was very unfair and coming from this elite fraternity that we have in our 450 players. You would think, like, you take care of each other.”

Kevin Love on his feelings towards Jerry Colangelo, what happened with Team USA

Fortunately, things worked out for Love. He proved himself as a meaningful contributor for the Cleveland Cavaliers and will likely return to the team next season, even with a $28.942 million salary. As for Colangelo, he’s being replaced by Grant Hill as Team USA’s managing director.