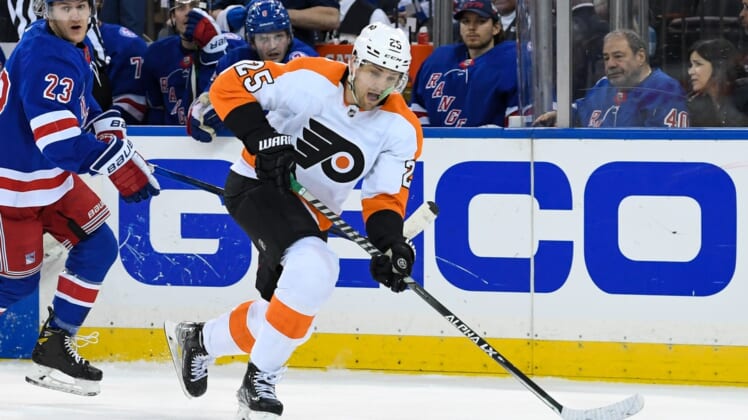 Kevin Hayes scored with the only goal of the shootout as the visiting Philadelphia Flyers recovered after blowing a three-goal lead and recorded a 4-3 victory over the New York Rangers Sunday night.

Hayes scored the game-winner against his former team when he lifted a soft shot over Igor Shesterkin’s blocker and stick in the third round of the shootout.

Backup goalie Martin Jones made 43 saves and then stopped Mika Zibanejad, Artemi Panarin and Filip Chytil in the shootout. Jones ended Philadelphia’s four-game losing streak when sprawled out in the crease and made a right pad save on Chytil.

Cam York and Owen Tippett scored in a 50-second span as the Flyers (22-36-11, 55 points) opened a two-goal lead in the opening 6:44 of the game. Joel Farabee scored 44 seconds into the third period before the Rangers stormed back.

Panarin scored New York’s first goal by deflecting a shot by Jacob Trouba when he stuck his stick out and lifted the puck into the net 38 seconds after Farabee converted a tap-in during a 2-on-0 rush.

Zibanejad got New York within 3-2 when he seized a loose puck and lifted the rebound of Frank Vatrano’s blast from the right side into the vacated right side of the net after the initial shot hit Jones in the mark.

Just 12 seconds after Zibanejad scored, Andrew Copp netted the game-tying goal with 4:20 to go when he streaked through the slot, got past Philadelphia defenseman Ivan Provorov and deflected Panarin’s backhand pass into the net.

Shesterkin made 23 saves as the Rangers (44-20-6, 94 points) moved within four points of the first-place Carolina Hurricanes and two ahead of the third-place Pittsburgh Penguins in the Metropolitan Division.

York opened the scoring by scoring his third after Nate Thompson cleanly won an offensive zone faceoff from Copp. Thompson dished the puck to York, who ripped a slap shot from above the right faceoff circle over Shesterkin’s glove.

Tippett scored moments after New York’s Julien Gauthier misplayed the puck in the neutral zone. Hayes gained possession and Tippett finished the play with an off-balance wrist shot from the middle of the slot that sailed by Shesterkin’s pad.