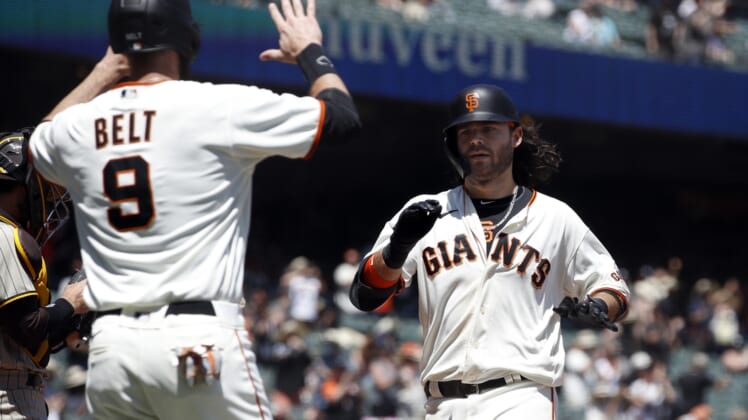 Two of the Giants’ three homers came off Padres starter Joe Musgrove (2-4), who took the loss.

Crawford’s three-run shot to right-center was the shortstop’s seventh of the season. Brandon Belt hit a solo shot in the fifth, also his seventh homer of the season, to make it 4-1. And Austin Slater, who had a pinch-hit RBI single in the sixth, hit a two-run homer in the eighth off reliever Nabil Crismatt.

Gausman, who had been on the medical list following a reaction to his second COVID-19 vaccination, was activated earlier Saturday and gave up one run on three hits and a walk with seven strikeouts in six innings to improve to 3-0 and lower his ERA to 1.97.

Gausman is 2-0 in three starts against the Padres. He has worked 19 innings this season against San Diego, allowing three runs on 14 hits and three walks with 18 strikeouts for a 1.42 ERA and 0.895 WHIP.

The Giants opened the second with three straight line drives off Musgrove. Belt led off the inning by pulling a single to right. Evan Longoria followed with an opposite-field double to right and Crawford followed with his blast to right-center.

Musgrove gave up four runs on eight hits in five innings. He didn’t walk a batter and struck out seven.

After giving up a two-out single in the first, Gausman retired 11 straight Padres before Jake Cronenworth singled with one out in the fifth and scored the Padres’ only run on a ground out by Austin Nola. The Padres had two runners on base in only two innings — the fifth and eighth — and were 0-for-8 with runners in scoring position.