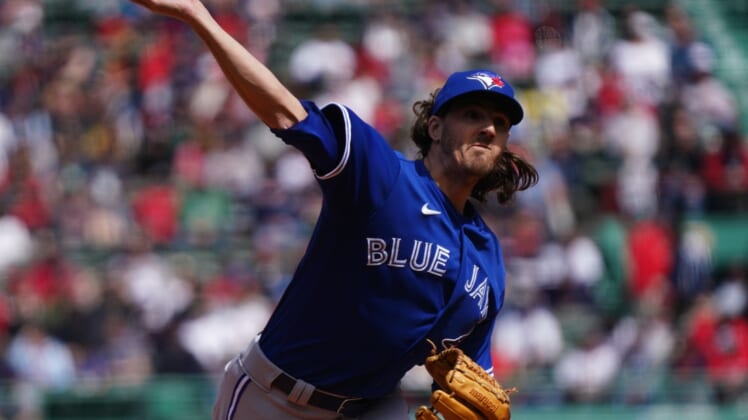 Kevin Gausman pitched into the ninth inning and Matt Chapman went 3-for-4 with a double and an RBI as the Toronto Blue Jays held on for a 3-2 victory over the host Boston Red Sox on Thursday afternoon.

Gausman (1-1) worked eight-plus frames to earn his first win in his third start for the Blue Jays. The right-hander needed just 88 pitches (70 strikes) to finish the dominant outing. He faced 28 batters and had five 1-2-3 innings.

Gausman was relieved by Jordan Romano after allowing a first-pitch single to Trevor Story in the ninth.

Romano stranded the tying run on third base to record his seventh save of the season. Boston’s first three batters of the ninth reached base.

Raimel Tapia and Bo Bichette each had two hits for the Jays, who won the last two games of the three-game series at Boston. Vladimir Guerrero Jr. drove in a run on a sacrifice fly.

The Blue Jays led 3-0 heading into the bottom of the ninth inning. After Story’s leadoff single and a Rafael Devers walk, Xander Bogaerts capped his 3-for-4 day with an RBI double down the left-field line to get Boston within 3-1.

Alex Verdugo followed with a run-scoring grounder to second to bring Boston on the cusp of tying the game. Jackie Bradley Jr. grounded out to first base to end the game.

Bobby Dalbec had two hits for Boston, which didn’t have an extra-base hit until Bogaerts’ ninth-inning double.

Toronto was held to one hit and struck out three times against Boston starter Tanner Houck over the first two innings before putting together a two-run third.

Gosuke Katoh drew a leadoff walk and Tapia hit a one-out single to set up the Jays’ first run on Bichette’s ground ball single just past a diving Story at second base. Guerrero doubled Toronto’s on his sacrifice fly to left.

The Jays greeted reliever Ryan Brasier with an insurance run in the sixth. Guerrero started the frame with a one-out double to right and scored after Chapman’s popup fell beside the pitcher’s mound for a single.