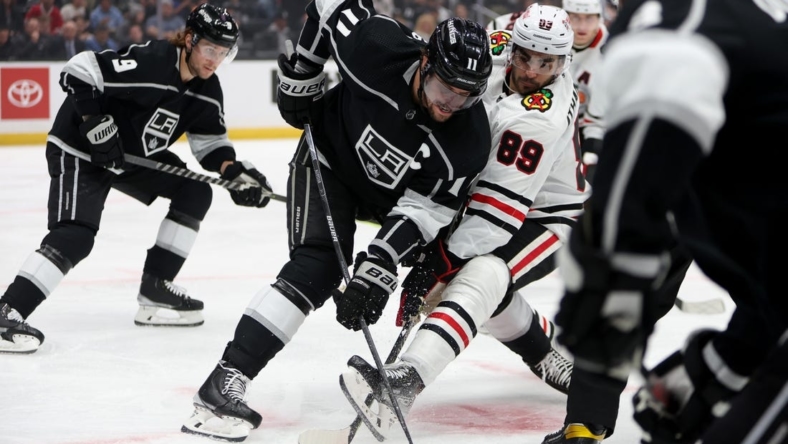 Kevin Fiala scored with 1.4 seconds left in overtime to lift the Los Angeles Kings to a 2-1 win against the visiting Chicago Blackhawks on Thursday night.

Phillip Danault scored in regulation and Jonathan Quick made 28 saves for the Kings, who earned their third victory in a row.

Taylor Raddysh scored and Petr Mrazek made 29 saves for Chicago, which beat the visiting Kings 2-1 in overtime on Nov. 3 for its only win in the past seven games.

Philipp Kurashev blocked Danault’s shot on a two-on-one rush in overtime, and Fiala was in position to put the rebound into the open side of the net.

Raddysh scored on a power play to give Chicago a 1-0 lead with 1:09 left in the first period.

Rasmus Kupari was in the penalty box for hooking Kurashev when Max Domi slid a pass from the top of the right circle to Jonathan Toews on the goal line to the side of the net.

Toews briefly stickhandled the puck before passing it to Raddysh coming through the slot for the one-timer, his fourth goal of the season.

Trevor Moore backhanded a diagonal pass to Viktor Arvidsson at the bottom of the left circle. Arvidsson stopped the puck with his skate and then passed it to Danault at the top of the circle for a one-timer that beat Mrazek for his fifth goal of the season.

The Kings had two power plays early in the third period but did not capitalize on either, dropping them to 0-for-8 with the man advantage over the past two games.

Quick was coming off his first shutout of the season, stopping 21 shots in a 1-0 win against the visiting Minnesota Wild on Tuesday.

Mrazek, who had been sidelined due to a groin strain, made his first start since a 4-3 overtime win against the visiting Detroit Red Wings on Oct. 21.