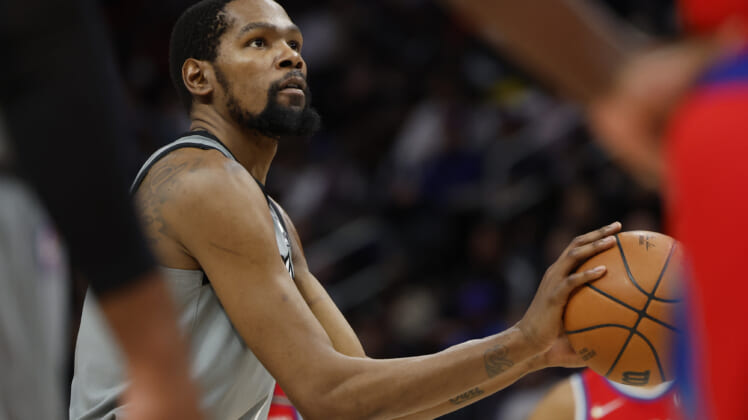 Kevin Durant is an interesting fellow. Known to have burner accounts in the past in which he’s hidden from his actual persona in an attempt to blend in with society as a normal human being who isn’t incredibly gifted on the basketball court, Durantula’s back at it. Just in time for Christmas, though his response seems more like an airing of his grievances ala a Festivus celebration seen in Seinfeld.

To his credit, at least this time Durant didn’t hide from who he is. He was brutally honest, out in the open publically trashing this random, unknown eighth-grade basketball player. The internet can be a cruel world, which is what Jayden Moore discovered on Dec. 20.

Initially, Moore, a 13-year old boy who plays basketball at Hopkins High School in Minnetonka, Minnesota was jubilated. Here a future Hall-of-Fame basketball player such as Kevin Durant was re-tweeting one of his flashy moves attempted on a basketball court.

But wait. Durant actually had a comment on the video too!

Ok then. Not exactly what Moore had in mind. But still, the tweet has over 18K likes and has been retweeted nearly 19K times.

Naturally, Moore was initially dismayed by the 11-time NBA All-Star’s comment, but then showed his maturity and has since found humor from the situation and chooses to rise above and learn from it instead. Not that he did anything wrong, he’s just not up to the standards of the Slim Reaper. Which, to be fair, very few are. Especially at just 13 years old!

“Like, what made him take time out of his day to say something negative instead of encouraging me or telling what really needs to be done and then texting me privately or something like that,” Moore said.

For whatever reason, KD35 wasn’t the only one who wanted to troll this young man. Current Los Angeles Lakers point guard Isaiah Thomas also chimed in.

While this will likely just end up as a hilarious story someday for Moore, it’s peculiar how several NBA players would rather randomly ridicule a player just trying something different as he develops his game. You can’t tell me Durant, IT, and thousands of others have attempted ridiculous moves on the basketball court. Let the kid play. Or, as he said, if you have some constructive criticism, some friendly advice, he’d greatly appreciate it.

Durant’s last retort about the situation at least provided some further clarity. Still, it would be awesome to someday see him get together and work out with the youngin, and maybe provide some helpful tips instead of trashing him online.

Finally, to cap it all off, Moore ended with a respectful reply to Durant, instead of an angry, short-sighted one. Even more respect to the young baller.