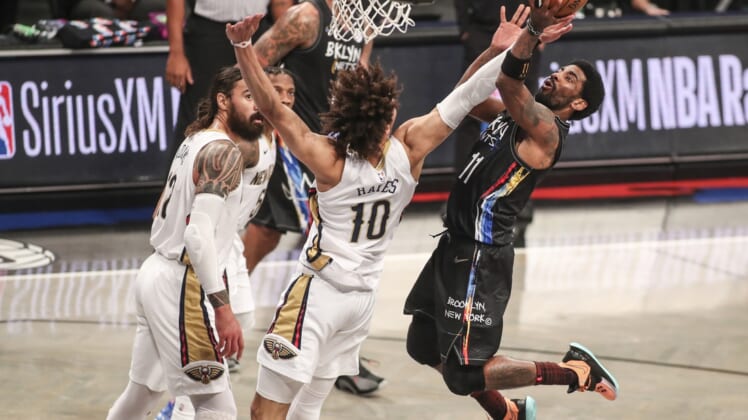 Kevin Durant played for the first time in nearly two months and was one of seven Brooklyn players to score in double figures as the host Nets routed the New Orleans Pelicans 139-111 on Wednesday night.

Durant, who last played on Feb. 13 and missed 23 consecutive games because of a hamstring injury, didn’t enter the game until the second quarter was nearly halfway over. He scored 17 points, making 5-of-5 field goals, 2-of-2 3-pointers and 5-of-5 free throws in 19 minutes.

Brooklyn had a season-high 37 assists on 51 field goals.

The Nets outscored the Pelicans 43-26 in the second quarter to take command and coast to their ninth consecutive victory at home. Brooklyn led by as many as 38 points.

Eric Bledsoe led New Orleans with 26 points despite being ejected after receiving two technical fouls late in the third quarter.

Zion Williamson scored 16 points on 4-of-12 shooting to end his streak of 25 consecutive games with 20-plus points on 50 percent shooting or better, which tied Hall of Famer Shaquille O’Neal’s record. Lonzo Ball added 15 points and Jaxson Hayes and Isaiah Thomas had 11 each.

The score was tied five times in the first quarter, the last at 33 after Williamson scored five straight points. Griffin beat the buzzer with a 3-pointer that gave the Nets a 36-33 lead at the end of the first quarter.

Durant didn’t enter the game until 7:37 was left in the second quarter and less than a minute later he made his first shot on a mid-range jumper that gave Brooklyn a 58-46 lead.

The Nets continued to increase the lead on their way to a 79-59 halftime lead. It was their highest-scoring half of the season as they scored the most first-half points by a Pelicans opponent this season.