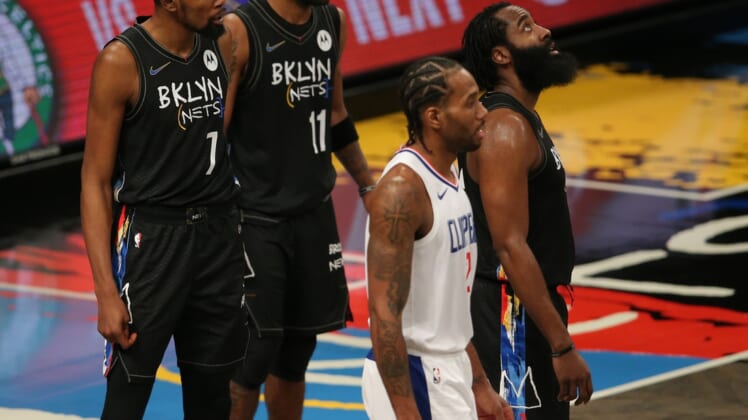 Kevin Durant is scheduled to perform at the $1.4 billion arena he helped build when the Brooklyn Nets visit the Golden State Warriors in a nationally televised contest on Saturday night in San Francisco.

The 10-time All-Star and two-time NBA champion, who spent three seasons as a member of the Warriors, has missed the last three games while in COVID-19 protocol.

He returned to practice in San Francisco on Friday and has been given the green light to play for the first time since an aborted 19-minute, eight-point effort last Friday against Toronto.

“I had some great years in Golden State,” Durant reflected this week. “Looking forward to being back in the Bay Area, but it’s just a shame the fans won’t be there.”

No doubt, Warriors fans would have had a mixed reaction to Durant’s return.

Some would see him as a catalyst in two championships and nearly a third before he ruptured his Achilles in Game 5 of the 2019 NBA Finals against Toronto.

Others would see him as the guy who single-handedly blew up a good thing, forcing a trade to Brooklyn and a move from which the Warriors have yet to fully recover.

Durant has left one “Big Three” for another.

He teamed with Stephen Curry and Klay Thompson to reach such heights in Oakland that team ownership became convinced a move to San Francisco and the construction of the state-of-the-art Chase Center were warranted.

Durant missed the 2020 season while rehabbing his Achilles and wasn’t scheduled to be with his new team when it played in San Francisco last March. However, that game never took place and was cancelled when the NBA stopped play.

The NBA scheduled the reunion at first opportunity this season, making it one of the showcase games on opening night in Brooklyn. Durant had 22 points and Kyrie Irving 26 in a 125-99 Nets blowout win.

Are Kevin Durant and Nets’ superstar trio for real?

The Nets have since become a “Big Three” with the addition of James Harden. He and DeAndre Jordan had double-doubles, while Irving went for 35 points when the Nets beat Indiana 104-94 at home on Wednesday in their most recent game without Durant.

Becoming better acquainted with Harden, who has played just 13 games with the Nets, is priority No. 1 on a five-game Western swing, Durant insisted.

“Going back to Golden State,” he said, “I’m looking forward to playing the game and being with the team to try to build some chemistry.”

Curry has done just that with new teammates Andrew Wiggins and Kelly Oubre Jr. of late. The Warriors have stuck their head over .500 by winning two in a row, with Curry pouring in 32 and 40 points, respectively.

Curry has averaged 40.3 points in his last four games as he continues to carry a heavy load not only without Durant but also without Thompson, who won’t play this season following Achilles surgery of his own.

He looks forward to seeing Durant again and the memories it has and will conjure up.

“It was some of the best basketball that I think the world has ever seen,” Curry said of the 2017, 2018 and 2019 seasons. “The ability to put that much talent and experience together and make it work. … We figured it out, and it was an amazing run. One that when it’s all said and done, we’ll remember the heights that we accomplished and achieved.”