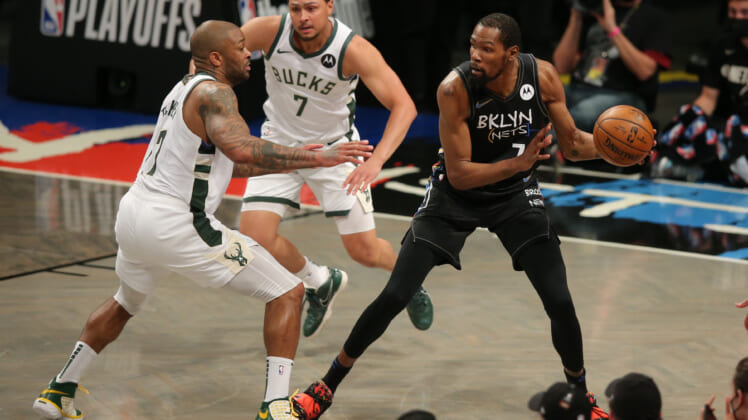 The Slim Reaper didn’t care. His alter-ego, Kevin Durant, had no concerns in the world. With Kyrie Irving sidelined and James Harden nowhere near 100%, the Brooklyn Nets star took it upon himself to hit legendary status in their Game 5 outing against the Milwaukee Bucks in the Eastern Conference Semifinals Tuesday night.

Bringing back memories of Rucker Park and the greatness we’ve seen on display at Madison Square Garden in the past, Durant turned back the clock in a big way. He did so with Brooklyn in need of a win to take a 3-2 series lead and avoid a three-game losing streak. He did so with Harden scoring five points on 1-of-10 shooting. This is a real thing that happened.

With Milwaukee owning a 14-point lead after the first quarter and Harden looking like a shell of his pre-injury self, hope was lost inside Barclays Center. The Nets were going to go down 3-2 in the series and likely fall short of an NBA title. Nothing Kevin Durant could do outside of an otherworldly performance would change this.

Well, the two-time NBA Finals MVP might have just proven that he is from beyond Earth’s atmosphere. He led the Nets all the way back in the game, winning by the score of 114-108.

The stats don’t even come close to telling us the entire story. Durant shot 16-of-23 from the field. He scored a whopping 49 points while grabbing 17 rebounds and dishing out 10 assists. Heck, KD became only the fourth player in NBA Playoff history with a 40-15-10 game. The other three?

Easy Money Sniper more than lived up to that nickname throughout his historically dominating performance against the Bucks Tuesday evening. It. Was. Absolutely. Insane.

What made this performance even more ridiculous is that a post-Achilles Kevin Durant played all 48 minutes in a game that the Nets needed to win.

This harkened back memories of Michael Jordan’s flu game. It reminded us of the greats of the past. Durant displaying his lethal mentality in the Mecca of the basketball world with two of his fellow star teammates hampered by injury.

In the process, Durant achieved a higher level of consciousness. It was a sight to behold.