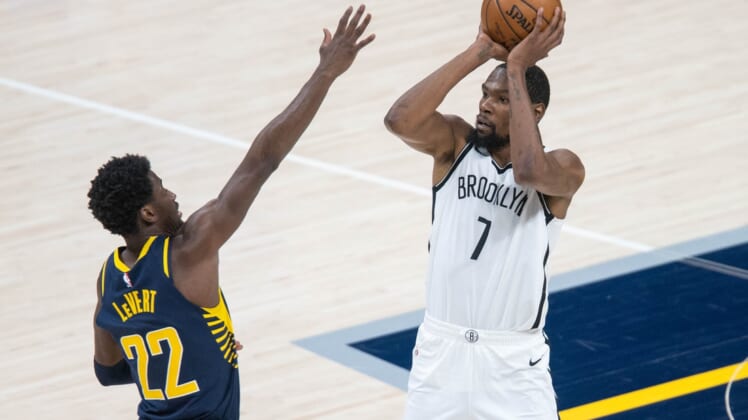 Kevin Durant shot 16-of-24 from the floor en route to matching his season-high of 42 points, Alize Johnson recorded 20 points and a career-high 21 rebounds, and the Brooklyn Nets completed a season sweep of the Indiana Pacers with a 130-113 win, Thursday in Indianapolis.

Brooklyn (43-20) has dealt with injury issues much of the season, and Thursday was no exception with Kyrie Irving announced as a late scratch from the lineup due to groin soreness.

Durant carried the load with 26.9-point per game scorer Irving sidelined, pacing the Nets to a 52.8 percent night shooting from the floor. All five Nets starters scored in double-figures, with Jeff Green, Joe Harris and Landry Shamet all hitting for 14 points and Tyler Johnson adding 11.

Durant helped supplement the team’s scoring with a game-high 10 assists. Brooklyn’s balanced scoring and effective shooting led to an almost wire-to-wire lead that swelled to as many as 23 points before a late Pacers rally.

Indiana (29-33) went on a 13-2 run spanning the first 4:52 of the fourth quarter, trimming the deficit to seven points. Doug McDermott scored four of his 15 points off the bench during the run.

But Brooklyn responded with a game-ending, 17-7 burst during which Durant scored his final six points.

Despite 36 points from Caris LeVert, which included a 5-of-9 performance shooting from 3-point range, Indiana made just 42.7 percent of its field-goal attempts and 28.2 percent from beyond the arc.

Aaron Holiday shot 2-of-5 from long range en route to 12 points. Oshae Brissett also hit 2-of-5 from 3-point range and finished with 14 points and nine rebounds.

With 11.6-per game rebounder Domantas Sabonis sidelined by a back injury, Indiana was beaten on the boards 50-38. Green’s seven rebounds were second-most to Johnson’s career-best performance for Brooklyn.