Warriors GM to meet with Kevin Durant, Klay Thompson this week ahead of free agency 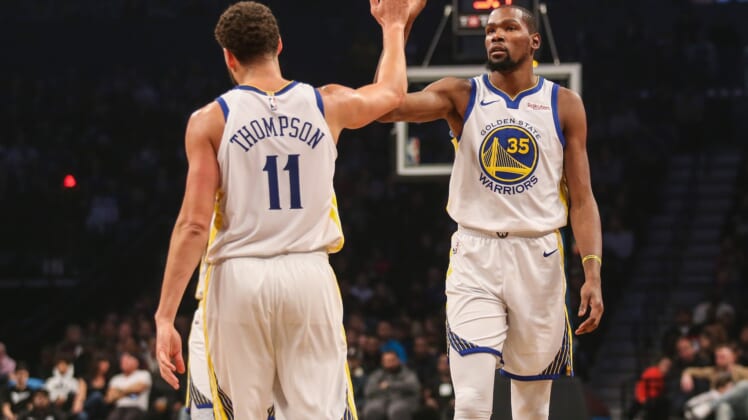 Golden State Warriors general manager Bob Meyers confirmed on Monday that he will meeting with both Kevin Durant and Klay Thompson this week.

Mark Medina of the San Jose Mercury News shared that Meyers gave a succinct “yes” to the question during a press conference about the upcoming NBA Draft.

Medina also confirmed that Thompson is expected to re-sign with Golden State “so long as he receives the five-year, $190 million the Warriors have said they will offer.”

Though, that’s not been a big question mark ever since Thompson’s own father definitively shut the door on other options recently.

As for Durant, the water’s a bit murkier.

Recently, there have been whispers that Durant is upset with the Warriors over the way things transpired late in the postseason, with NBA insider Ric Bucher saying the superstar isn’t happy with how things played out.

“There’s an element of, ‘Was I misled as far as injuring myself coming back and playing and having a catastrophic injury like this coming off a calf strain?’” Bucher said in an appearance on 95.7 The Game. “We don’t know, definitively, exactly what was said, how much was said, how much he was aware of that, but I can tell you that people in the KD camp, people are running for cover because they don’t want to be holding the bag on who led him astray.”

What we do know for certain is that the Warriors are interested in bringing Durant back, despite what figures to be at least a one-year recovery time from his ruptured Achilles. In fact, Meyers himself recently said the franchise has no budget when it comes to acquiring the talent necessary to continue vying for championships.