Kevin Durant hits for 32 as Nets rally to beat Knicks 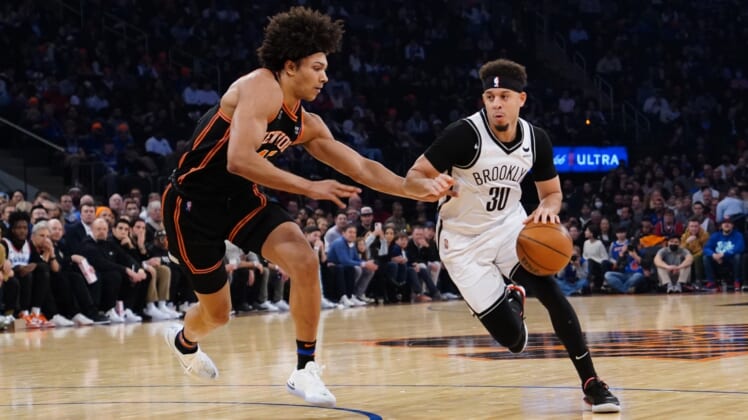 Kevin Durant scored 23 of his 32 points in the second half as the visiting Brooklyn Nets rallied for a 110-98 victory over the New York Knicks on Wednesday night.

Durant shot 11 of 22 and also posted a triple-double by collecting 11 assists and 10 rebounds as Brooklyn (42-38) moved within one game of the seventh-place Cleveland Cavaliers, whom they host on Friday.

Irving made 9 of 26 shots and also added eight rebounds and seven assists in his first game as a Net at Madison Square Garden.

Curry and Patty Mills contributed 15 points apiece and the duo combined for eight of Brooklyn’s 14 3-pointers as the Nets shot 44.1 percent from the field overall.

Alec Burks scored 24 points, but the Knicks scored just 31 points after halftime and were outscored 60-25 in the final 23:16 of the game.

Barrett added 23 and Obi Toppin contributed 19 for New York, which shot 38.6 percent, missed 15 free throws and did not get a field goal over the final 7:10.

The Knicks ripped off 19 straight points spanning 4:10 bridging the first and second quarters to open a 38-25 lead on a basket by Toppin with 9:55 remaining in the first half. The lead grew to 63-46 when Evan Fournier hit a 3-pointer with 2:39 remaining and the Knicks held a 67-50 advantage by halftime.