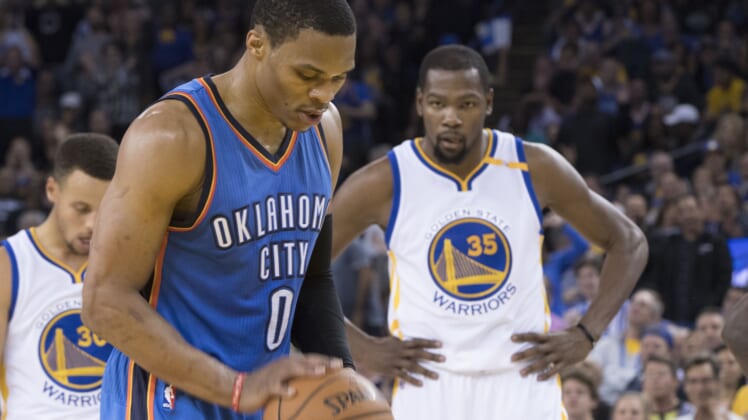 Kevin Durant and Russell Westbrook aren’t exactly best buddies these days. In fact, the two of them haven’t really been on speaking terms since Durant abandoned Westbrook last offseason en route to winning a championship with the Golden State Warriors.

So, when Durant congratulated Westbrook for winning the MVP trophy Monday night (via his official YouTube page), it was quite a noteworthy event.

“Huge congrats to Russell Westbrook on MVP, that boy went out there and was a created player on 2k all year, F– balled out. Gotta respect it!”

It’s really impossible to argue Westbrook didn’t deserve the honor. He broke an NBA record by recording 42 triple-doubles, averaged a triple-double throughout the season — 31.6 points, 10.7 rebounds and 10.4 assists per game — and took his team, sans Durant, to the playoffs.

Durant and Westbrook have quite a history together as teammates for eight seasons as members of the Oklahoma City Thunder. They also reached the NBA Finals together in 2012 but fell short of the ultimate goal.

It’s nice to see Durant with the olive branch of respect to his former running mate. Though, it might take a bit more time and distance before Westbrook is willing to reciprocate.