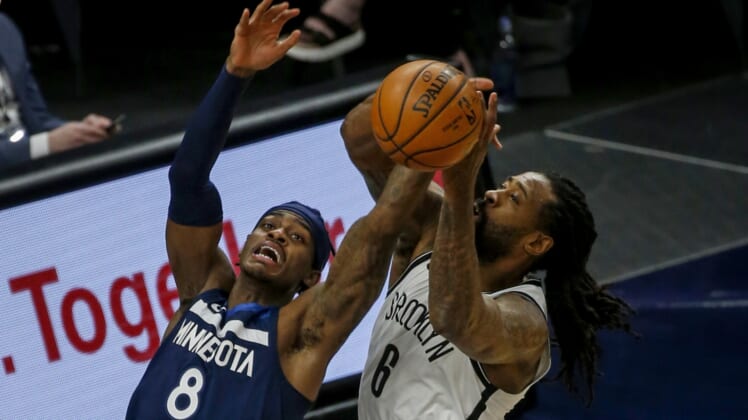 Kevin Durant scored 31 points on 11-for-15 shooting to lead the shorthanded Brooklyn Nets to a comfortable 127-97 victory over the Minnesota Timberwolves on Tuesday in Minneapolis.

The Nets snapped a five-game losing streak at Minnesota and beat the Timberwolves for the second time in the past 16 days.

The game was played without any fans in attendance at the Target Center after being rescheduled from Monday in the wake of the police shooting of Daunte Wright, which sparked protests around the city of Minneapolis.

In his third game back after missing the previous 23 with a hamstring strain, Durant played 27-plus minutes and led a Nets squad which was without James Harden (right hamstring strain), Kyrie Irving (personal reasons), LaMarcus Aldridge (illness) and Tyler Johnson (right knee soreness).

Brooklyn shot 46-for-91 (50.5 percent) from the field including 15-for-36 from 3-point range and recorded 31 assists, marking its 19th game this season with 30 or more. The Nets cruised from the second quarter on against Minnesota, which was without center Karl-Anthony Towns.

Timberwolves coach Chris Finch said pregame that Towns opted out of playing on Tuesday to spend time with his family as he mourns the one-year anniversary of his mother’s death as a result of COVID-19.

Rookie Anthony Edwards led Minnesota with 27 points and eight rebounds while D’Angelo Russell finished with 15 points off the bench.

The Nets, who are without Spencer Dinwiddie (partially torn right ACL) likely for the remainder of the regular season, played what became the first of back-to-back games before heading to Philadelphia.

Brooklyn used a 16-1 run to open a 23-point lead to start the second quarter and led by as many as 45 points in the fourth quarter.

Joe Harris scored 23 points and went 5-for-8 from 3-point range while Landry Shamet totaled 19 points, five rebounds and five assists off the bench. DeAndre Jordan totaled 13 points and seven rebounds and shot a perfect 5-for-5 from the field.

Brooklyn’s Chris Chiozza left the game after playing 14 minutes with a hand injury.