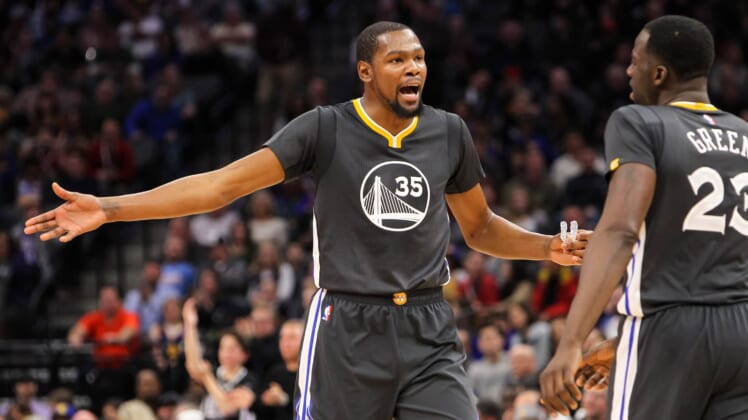 Kevin Durant is sick and tired of all the national pundits sounding off on how much better the Golden State Warriors supposedly are without him. On Monday he once again expressed his frustration with the narrative that’s being spun around this topic, and afterward, teammate Andre Iguodala backed him up in a big way.

It all started with a Fox Sports Radio segment during which NBA insider Chris Broussard said that the Warriors winning a title without the star means “Kevin Durant’s worst nightmare is coming true.”

Now, Durant might still come back for the NBA Finals following his calf strain. So, there’s quite a bit of speculation involved here, just for starters.

Additionally, as Durant himself pointed out on Twitter after seeing Broussard’s message, winning another title — injured or not — certainly isn’t anyone’s “worst nightmare.”

Durant wasn’t the only Warriors player who responded, either. Iguodala had something even more pointed to say, though due to language we won’t be posting it here.

Draymond Green also has recently chimed in on the narrative that’s surrounded Durant since he was injured. He backed KD in a big way. And, if anyone on Golden State’s roster was going to have a negative take on any of this, you’d think Green would be the one to have it given his history with Durant.

Quite honestly, it seems like the only thing that these media narratives have done for the Warriors is galvanize them even more. That’s bad news for the rest of the NBA. And if Durant does come back for the NBA Finals, it’s hard to envision Golden State not pulling of the three-peat.