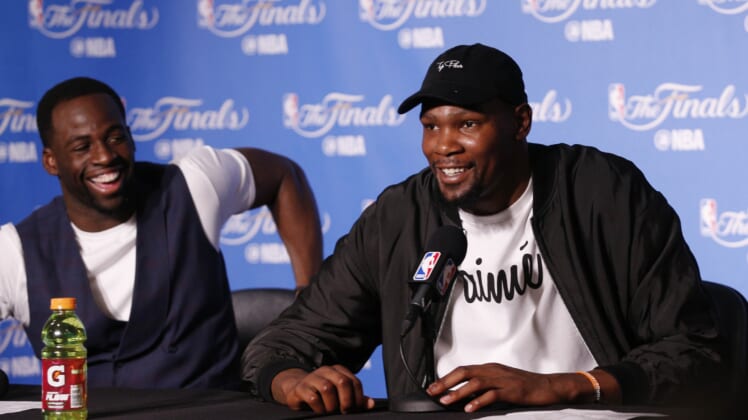 Just who was responsible for the Kevin Durant air conditioner incident? That’s a question we’re determined to find the answer to, and we have some suspects.

A Tuesday press conference with the Golden State Warriors star was cut short when an air conditioning unit above him started to make weird noises.

KD bolted quick when the A/C was acting up. pic.twitter.com/NPdy0q9MtT

Now, was this just a coincidence? Well, of course it was. But where’s the fun in that?

What if this was actually someone trying to hurt, or at least get in the head of Durant ahead of Game 3? Who would be the most likely culprits.

Well, we absolutely must begin this list with Durant’s ex-teammate turned nemesis.

During Game 1 of the NBA Finals, Durant’s former Oklahoma City running mate made it known that he was watching Sister Act II.

Nice try, Russ, but nobody is that naive. If it was the original Sister Act, we’d believe you. But the sequel?

This screams of Westbrook trying to set up an alibi.

Here, it depends on what the suspected motivation was.

If the goal was to get in Durant’s head, LeBron is an easy suspect. It seemed to have done the trick.

But it was something more sinister, J.R. is the guy.

The air conditioner didn’t actually fall on Durant. It made a noise and Durant had plenty of time to get out the way. If LeBron was doing it, it might have had a chance to work. But someone trying to get the job done only to fail? If that doesn’t sound like J.R. Smith in the 2017 Finals, nothing does.

Curry has been tremendous through the first two games of the NBA Finals. But is anyone talking about him as an MVP? No.

Remember, Curry didn’t win the finals MVP in 2015, either.

We’re not sure if Curry was actually trying to get the AC to fall on Durant. But at the very least, we suspect that he might have been sending a message.

It was a long time ago, but we can’t forget what happened. In 1999, Rikishi ran down Stone Cold Steve Austin in a car. He originally claimed to have done it “for The Rock” but it was later revealed that Triple H was the mastermind.

What does Rikishi have to do with Durant or the NBA Finals in general? We haven’t exactly figured that one out.

Still, in the immortal words of Stone Cold, Rikishi should consider himself guilty until proven innocent.

We don’t suspect Draymond for anything malicious. We just wonder where he goes to practice all the creative ways to kick someone in the groin.

Maybe he makes his way to the air conditioning unit of the respective arenas on off days. Given that this isn’t the Warriors home, it’s possible that he may not have even known that he was right above Durant at the time.

6. Residents of The Hamptons

For years, outsiders have gotten all of their Hamptons info from Seinfeld.

It’s was where one of the world’s ugliest babies lived. It was also where two of the most traumatic experiences of George Costanza’s life happened. The first came when his friends saw his girlfriend topless before he ever did. The second came right after he had been in the pool.

They were just getting over it. Now, it’s the site where Durant and the Warriors merged to become a superteam.

You can just imagine all of the questions people in the Hamptons get from outsiders. After all this time, maybe they decided enough was enough.