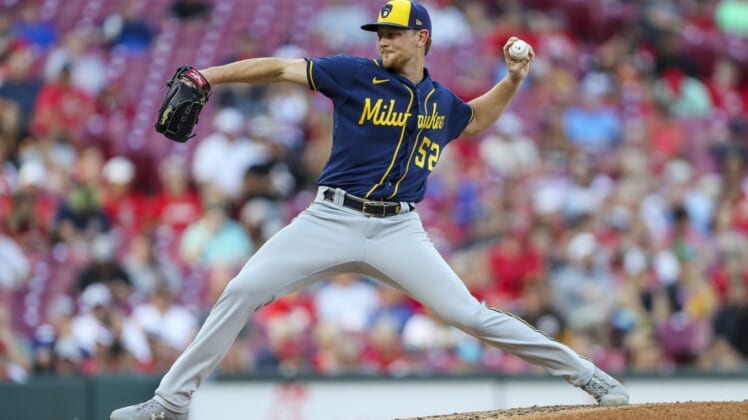 Keston Hiura broke a tie with a opposite-field homer in the seventh inning, leading the visiting Milwaukee Brewers past the Cincinnati Reds 5-4 on Friday in the opener of a three-game series.

Eric Lauer (6-2) survived allowing three homers and four runs over 6 1/3 innings for the Brewers, who won for just the fourth time in 16 games.

Milwaukee reliever Brad Boxberger retired pinch hitter Joey Votto on a deep fly to center with the tying and winning runs on base to record his first save this season. Votto took himself out of the lineup just prior to the game and told reporters that he was just taking an extra day of rest.

Rookie Hunter Greene, who was named the National League Player of the Week on Monday, lasted just five innings and was tagged for two more home runs by Milwaukee hitters. In three starts against the Brewers this season, Greene has served up eight home runs.

Greene walked two and yielded four hits. He but didn’t allow a hit until back-to-back singles by Rowdy Tellez and Andrew McCutcheon to open the fourth set the table for Hunter Renfroe, who crushed a 98 mph fastball to the seats in left field for a 3-0 Milwaukee lead.

The Brewers again victimized Greene with the home run ball in the fifth when Willy Adames connected on a hanging slider for his 12th homer and 4-0 advantage.

The Reds cut the deficit in half in the fifth off when Mike Moustakas singled and Albert Almora Jr. socked his third homer of the season. Back-to-back homers from Brandon Drury (No. 14) and Tommy Pham (No. 9) tied the game in the sixth.

The Brewers got the lead back for Lauer in the seventh.

With two outs and no one on base, reliever Ross Detwiler (0-1) missed with a 93 mph, first-pitch fastball to Hiura, leaving it over the middle of the plate. Hiura drove it over 400 feet to the seats in right-center for his sixth homer and a 5-4 Brewers lead.

Milwaukee’s Devin Williams pitched around a single in the eighth inning. With closer Josh Hader on paternity leave, Boxberger handled the ninth.