Kershaw scratched, Dodgers try to even NLCS vs. Braves 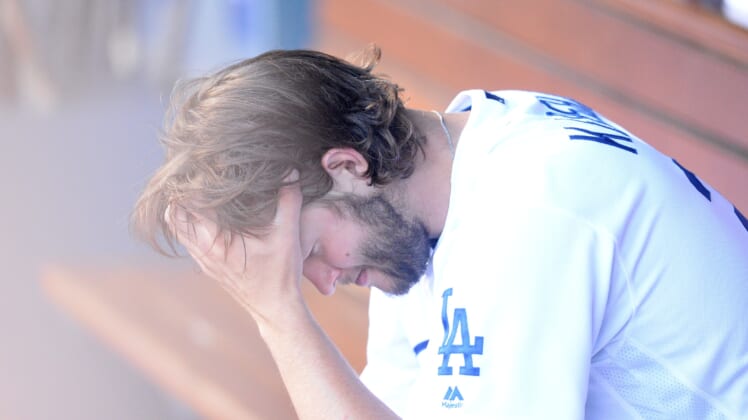 In an unfamiliar ballpark, with fans in the stands for the first time all season, the Atlanta Braves have figured out how to replicate their effort no matter the outside influences.

It didn’t even matter that they were facing the playoff-seasoned Los Angeles Dodgers as the Braves jumped out to a 1-0 lead in the National League Championship Series with a 5-1 victory Monday at Globe Life Field in Arlington, Texas.

The Texas Rangers’ new retractable-roof stadium doesn’t give up many home runs, or at least it had not in the regular season. The venue’s 0.57 homers per game ranked last in the majors.

The Braves made it look like a Rangers-specific issue Monday, getting a first-inning home run from veteran Freddie Freeman and ninth-inning homers from Austin Riley and Ozzie Albies. Riley’s leadoff homer in the ninth off Dodgers right-hander Blake Treinen broke a 1-1 tie.

The stage was set for the ninth-inning outburst by another solid pitching performance from the Braves’ staff. Rookie right-hander Ian Anderson will get the ball in Game 2 trying to match what Max Fried did in Game 1, when the left-hander held the Dodgers to a single run, on an Enrique Hernandez home run, over six innings.

Despite having just eight major league games to his credit, including the playoffs, Anderson has been dominating. He didn’t allow a run in his first two postseason starts, but in his third, he will face the Dodgers for the first time.

Atlanta relievers Chris Martin, Will Smith and Mark Melancon held the Dodgers hitless over the final three innings to close out the Game 1 victory.

“I think it’s important getting Game 1 of a regular-season series,” Braves manager Brian Snitker said. “And on this stage right here, with what we’re doing, this is huge for us. That was a tough game, man. That was two really good ballclubs going at it, and that was something else.”

While the Braves were playing at Globe Life Field for the first time, the Dodgers were playing their seventh game there. And even though they swept the San Diego Padres in Arlington during the NL Division Series, they had to use a new game plan.

The Dodgers led baseball with 118 home runs in the regular season, but they have just two homers in four playoff games at Arlington. Los Angeles leadoff hitter Mookie Betts is 4-for-16 (.250) in the playoff games at Texas, but he did score three runs in the clinching victory over the Padres. He was 0-for-4 with a strikeout in Game 1 against the Braves.

“You know at times I think there is crossfire and they are trying to crowd (Betts) and also spin him,” Dodgers manager Dave Roberts said. “I think he has his approach and he prepares. You just have to be diligent and capitalize on mistakes. But when they make good pitches, it’s going to be tough.”

The Dodgers will counter the Braves’ Anderson in Game 2 with right-hander Tony Gonsolin, who has been tabbed to make his postseason debut. Gonsolin, who hasn’t pitched since Sept. 26, went 2-2 with a 2.31 ERA in nine games (eight starts) during the regular season.

It’ll be a tall task for the 26-year-old second-year player, especially given what the Braves pitchers are doing — four shutouts in six playoff games and a 0.93 postseason ERA.

“They made some mistakes that we just didn’t capitalize on, but you can see that their plan was to spin us a lot more,” Roberts said. “We just have to continue to swing at strikes.”

Gonsolin has one appearance against the Braves. He pitched four innings in a start in Atlanta in August 2019, giving up a run on five hits in four innings in the third start of his major league career.