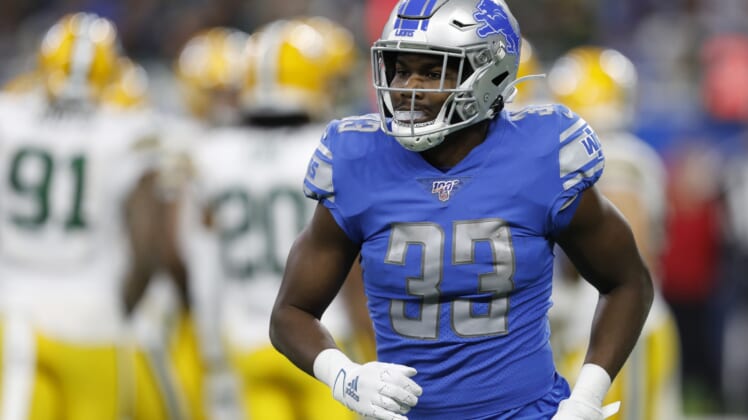 Just three years after being drafted by Detroit Lions with the No. 43 overall pick, running back Kerryon Johnson could be looking for a new NFL team in a matter of days.

Johnson, a second-round pick in the 2018 NFL Draft, quickly exploded on the scene in Detroit. While he only played in 10 games, starting seven, the 5-foot-11 back racked up 641 rushing yards, 213 receiving yards and averaged 5.4 yards per carry as a rookie.

The Lions seemed to have found their featured running back, a player capable of becoming their first 1,000-yard rusher since Reggie Bush (1,006) in 2013. Instead, things quickly unraveled for the former Auburn star as his effectiveness and explosiveness declined with recurring injuries.

NFL Network’s Ian Rapoport reported that Johnson is being waived, but the Lions haven’t confirmed the move as of now. With D’Andre Swift, Jamaal Williams and Jermar Jefferson on the roster, though, it seems inevitable that Detroit will move on from its former second-round pick.

Many expected the Miami Dolphins would use their first-round pick, or at least a Day 2 selection, on a running back. While Myles Gaskin showed flashes of promise this past season, averaging 4.1 yards per carry, he is a former seventh-round pick who didn’t seem right for a featured role.

But the Dolphins waited to address the position until Round 7, taking Cincinnati’s Gerrid Doaks with the 244th pick. He brings some power for the position, but profiles as the No. 3 running back on a depth chart. Given the lack of investment at the position, Johnson could make sense for Miami.

The injury history is concerning, with a meniscus tear (2019), knee strain (2018) and shoulder issues on his record. He played in all 16 games this past season, but that was in a diminished role. Johnson might not be the explosive player we saw in 2018, but he’s effective in catching the football out of the backfield (10.8 yards per reception in last 24 games) and he could pair nicely with Gaskin in a committee backfield.

Atlanta Falcons roll the dice on another running back

The Todd Gurley experiment didn’t work out for Atlanta and its depth chart at running back was basically cleaned out this offseason. Mike Davis, who averaged just 3.9 yards per carry last year in Carolina, is currently the favorite to start at running back. Given the lack of depth behind him, Johnson might be a fit.

Davis will almost certainly need a running mate, especially given Arthur Smith’s fondness for running the football. Of course, signing Johnson won’t be easy. The Falcons would need to hope he is on the market for at least a month, giving them time to make a Julio Jones trade in order to create cap room.

Atlanta is in a spot where it could use all the young talent it can find, especially at positions of need. If Johnson is released, this could be a good landing spot for him to prove himself in 2021 and it might even be a long-term fit for both sides.

Johnson landing with the New York Giants wouldn’t be the outcome fantasy football owners want. Saquon Barkley, who should be recovered from his torn ACL, is still expected to be the featured back of this offense. But the Giants like having reliable depth at the position and Johnson would be an intriguing fit in New York.

While Devontae Booker is on the roster, he’s nothing more than a third running back for a team and he’d be limited if thrust into a featured role. As for Gary Brightwell, he’s expected to primarily play special teams in 2021. As a result, there’s a real opportunity for Johnson to be the Giants’ No 2 running back.

Johnson could handle a majority of the reps in the preseason and handle a sizable share of the touches in September, with Barkley working to regain his confidence and game-changing ability. Keeping the star running back fresh early will preserve him for November and December, when New York could be competing for a playoff spot. If Kerryon Johnson becomes available, the Giants should make a call.