Keon Ellis nails late trey to lift No. 19 Alabama past No. 14 Tennessee 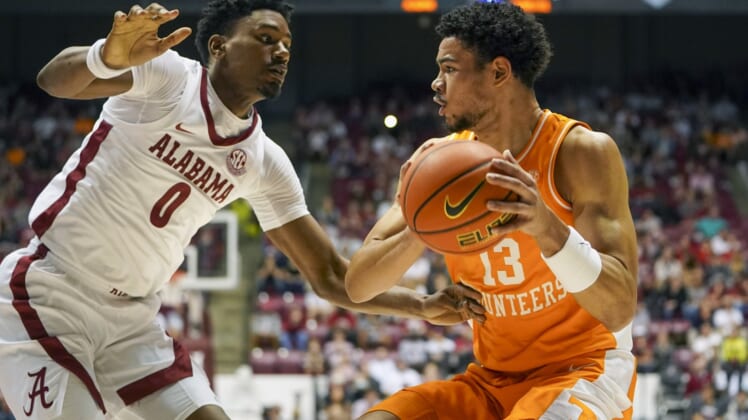 Keon Ellis drilled a 3-pointer with 41.7 seconds left Wednesday night to give No. 19 Alabama the lead for good in its 73-68 win over 14th-ranked Tennessee in Tuscaloosa, Ala.

JD Davison and Noah Gurley combined to make three of four foul shots in the final 30 seconds to put the contest away. Gurley, a Furman transfer, came off the bench to post game-high totals of 20 points and 10 rebounds.

Jahvon Quinerly added 18 points and Jaden Shackelford scored 12, although he made only 5 of 17 shots. Alabama survived 7 of 31 shooting from the 3-point arc because it earned a 43-35 advantage on the boards and shored up its defense.

Tennessee made only 34.9 percent of its attempts from the field, including 7 of 29 on 3-pointers, and was only 9 of 31 in the second half. Nkamhoua scored 15 points to pace the short-handed Volunteers, who played without two starters. Santiago Vescovi added 13 before fouling out and Zakai Zeigler chipped in 11.

But Tennessee still controlled most of the first half, even though Alabama took a 12-7 lead at the 12:38 mark when Quinerly stroked a 3-pointer. A 12-2 run put the Volunteers ahead 21-16 when Nkamhoua put back his own missed shot.

Brandon Huntley-Hatfield turned a Tide turnover into a layup with 3:23 left to give Tennessee a 33-23 advantage. However, Alabama had the last word, scoring the half’s final 10 points and forging a tie at intermission when Shackelford drained a transition 3-pointer.