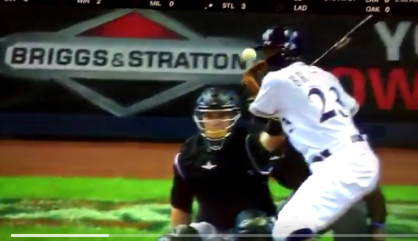 Brewers outfielder Keon Broxton left the game Thursday against the Rockies after being hit in the head by a pitch.

Keon Broxton hit in the face though the extra flap thankfully seemed to take *some* of the brunt. He's out of the game. pic.twitter.com/Md2uF2ZxtO

After watching the footage over and over again (and it’s okay to admit that you did), it looks like it could have been way worse for Broxton. “Luckily,” the face guard/flap of the helmet seems to have taken the brunt of some of the ball, protecting his face.

The 26-year-old left with a bloody nose. We don’t know the severity of the injury quite yet, but in the meantime, Kirk Nieuwenhuis will take over in center field.