Nov 7, 2021; New York, New York, USA; Albert Korir of Kenya has the lead as he runs through the streets of Manhattan during the 2021 New York City marathon. Mandatory Credit: John Jones-USA TODAY Sports

Albert Korir won the men’s division and Peres Jepchirchir the women’s race to give Kenya a sweep of the New York City Marathon on Sunday.

Korir won the race in 2:08:02 after passing Mohamed El Aaraby of Morocco and Eyob Faniel of Italy with about eight miles remaining.

Komir finished second to Geoffrey Kamworor, also from Kenya, in 2019.

The race was canceled in 2020 because of the coronavirus pandemic.

On the women’s side, Jepchirchir broke away from countrywoman Viola Cheptoo and Ababel Yeshaneh of Ethiopia near the finish line to win in 2:22:39. 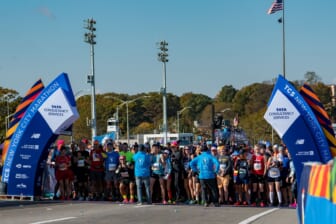 She won the marathon in the August in the Tokyo Olympics.

Molly Seidel, who won the bronze medal in the events at the Olympics, set a record for an American woman, finishing in fourth place in 2:24:42. She said she ran with two broken ribs.