Kenyan Drake reintroduces himself in win over Broncos 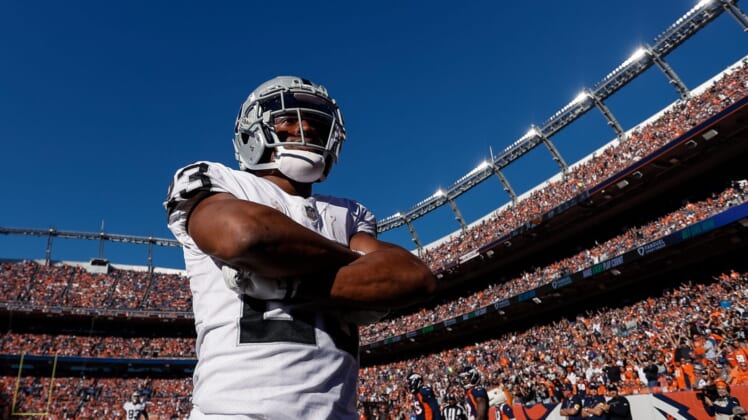 Going into Sunday’s game against the Denver Broncos, the Las Vegas Raiders had to establish an offensive identity and, in the process, they rediscovered Kenyan Drake, who became an afterthought over the last couple of weeks.

Between Weeks 4 and 5, Drake recorded just three carries for 13 yards and saw one target. Against the Broncos, he racked up 73 scrimmage yards and scored touchdowns on back-to-back drives.

On his first scoring play, Kenyan Drake beat Broncos linebacker Alexander Johnson on a wheel route and hauled in a well-placed pass from quarterback Derek Carr for 31 yards:

For the Raiders first possession of the second half, running back Josh Jacobs started the drive and Kenyan Drake finished it with an 18-yard run straight to the end zone—thanks part to textbook blocks from rookie right guard Alex Leatherwood and center Andre James.

Drake, once the forgotten man in the Raiders offense, reintroduced himself as the dynamic playmaker fans envisioned when the team signed him to a two-year, $11 million deal this past offseason.

In an interview with Sirius XM NFL (h/t ESPN’s Mike Clay), Drake spoke about the potential role that would allow him to showcase his complete skill set.

Back in April, Gruden boasted about Kenyan Drake’s versatility.

“He can run it, catch it and return it,” Gruden told ESPN.

However, after Week 3, Gruden seemed to fall out of love with his new offensive weapon. Drake touched the ball 11 times in each of the first three games before his involvement in the offense turned into short cameos in October.

While Jacobs maintained his role as the featured tailback with 16 carries and a reception on a rare Raiders screen, offensive coordinator Greg Olson carved out a role for Drake, and he made the most of his opportunities.

Though it’s too early to say the Raiders offense will operate like a well-oiled machine for most of the remaining games, Olson has certainly earned some trust that he’ll utilize the plethora of offensive playmakers within the offense.

With Kenyan Drake involved as a downhill runner, Vegas may be able to jump-start its ground attack. Carr had another strong performance, throwing for 341 yards and two touchdowns against Denver’s fifth-ranked pass defense. Because of the Raiders’ success through the air, they went with what worked and didn’t try to force-feed their ball carriers.

Nonetheless, Jacobs and Drake combined for 87 yards and two touchdowns on the ground, which helped propel the team to victory.

Based on Kenyan Drake’s contract, Gruden likely planned for his top two running backs to split the load out of the backfield. Perhaps Peyton Barber’s career game (111 rushing yards) against the Miami Dolphins in Week 2 and the struggle to run the ball while playing from behind minimized Drake’s touch volume.

Whatever the case, Olson managed to script a game plan that led the Raiders downfield for their first touchdown in an opening quarter of this season. Drake had a carry for six yards on the first drive, which became a warm-up for his bounce-back game.

By no stretch of the imagination, the Raiders had their most balanced offensive performance in terms of scoring throughout a contest. Unlike the matchup against the Dolphins, they didn’t have to fall behind in order for the offense to wake up several drives into the game. Secondly, the Silver and Black scored a season-high 34 points and didn’t need overtime to crack 30 on the scoreboard.

If Sunday’s performance is any indication of what’s to come, the Raiders will field an offense that’s truly hard to defend because of its balance and efficiency. Plus, the critics who crushed the team’s decision to sign Kenyan Drake may have to praise the move as he becomes a real X-factor and potential spark plug in any given situation.