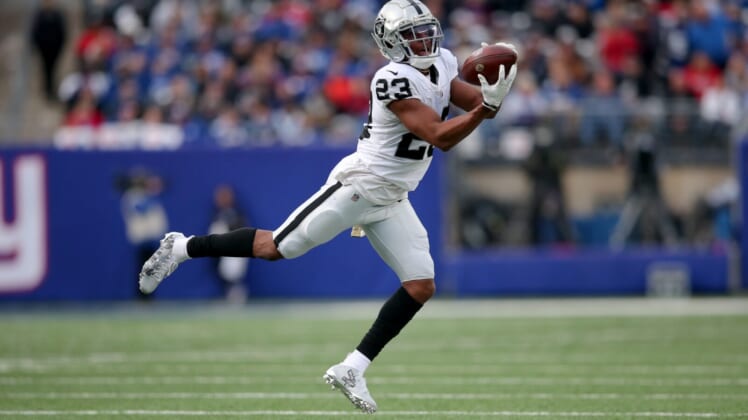 Through November, Las Vegas Raiders running back Kenyan Drake has been in and out of the game plan, which is an annoying realization when you consider the front office signed him to a two-year, $11 million deal ($8.5 million guaranteed).

In 11 games, Kenyan Drake has recorded 10-plus touches (rush attempts plus receptions) in five contests and single-digit touches in six outings. He’s averaging 5.9 yards per touch compared to Josh Jacobs’ 4.4 yards per touch.

Of course, Jacobs faces more formidable resistance on early downs, and his average takes a hit with a heavier rushing workload than Drake. However, the Raiders usually get a good bang for their buck when the latter receives the ball in space.

Kenyan Drake showcased his versatility this season despite his inconsistent role, racking up 537 (254 rushing and 283 receiving) scrimmage yards while averaging 4.1 yards per carry and 9.8 yards per reception.

Though offensive coordinator Greg Olson should make a concerted effort to spur Jacobs’ production, he needs to keep Drake involved, especially in the next couple of games.

Kenyan Drake and his role vs. WFT

On Sunday, the Raiders will likely take the field without star tight end Darren Waller, who suffered a strained IT band, per NFL Network’s Ian Rapoport and Tom Pelissero. Interim head coach Rich Bisaccia believes the Pro Bowler is “week-to-week” with the knee injury.

While many expect Foster Moreau to take on a more prominent role in Waller’s absence, Kenyan Drake can also fill a void in the intermediate passing game. That’s part of the reason he’s in Las Vegas—to pick up yards on the short completions and occasionally pose a threat when in the slot or out on the boundary.

According to Pro Football Focus, Drake has lined up out wide or in the slot 35 times this season. Olson has to exercise a little more creativity with Waller sidelined or at well less than 100 percent.

In Waller’s absence, Drake can take on a more significant role in the passing game.

Quarterback Derek Carr has done a good job at spreading the ball around and identifying favorable matchups throughout his career. During this week’s film study, he should draw a big bull’s-eye on Washington linebackers Cole Holcomb and Jamin Davis.

As Football Team defensive coordinator Jack Del Rio prepares for deep airstrikes to wide receiver DeSean Jackson, Carr can take advantage of matchups in the middle of the field with Moreau and Drake, who’s recorded 12 first downs on receptions.

Washington fields a stout run defense that cedes the fourth-fewest yards and ranks ninth in yards allowed per carry. Furthermore, the unit has surrendered just eight rushing touchdowns this season. Don’t expect much from Jacobs and Drake on the ground in terms of yards, but the Raiders can successfully test the Football Team’s linebackers with a high-end pass-catching running back.

On one hand, Washington’s defense has shown improvement after a rough start, holding its last five opponents to 24 or fewer points. Yet, in that same stretch, the unit gave up a passing touchdown to a running back or tight end in all those games. Carr can extend that streak with Drake, who has at least five receptions in three contests this season.

Typically, the Raiders have used Kenyan Drake sparingly while Jacobs plays at full strength, but the former’s pass-catching ability makes him a significant threat in a matchup with an aggressive top-five blitzing defense that at times leaves its linebackers to fend for themselves on an island while in coverage.