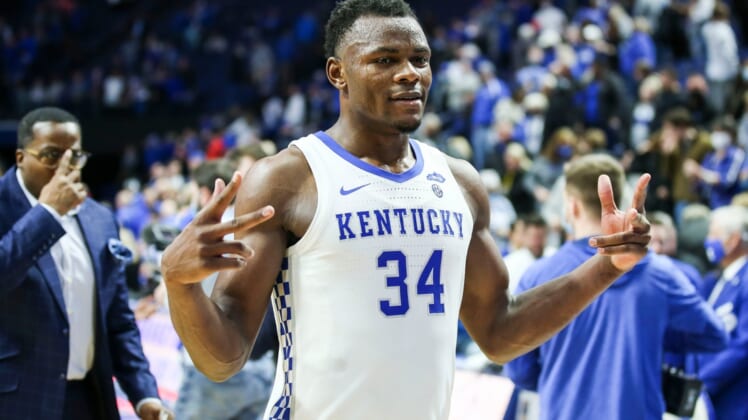 Kentucky forward Oscar Tshiebwe was selected the Associated Press Player of the Year on Friday after a dominant junior season in which he averaged 17.4 points and 15.1 rebounds.

AP Coach of the Year honors went to Arizona’s Tommy Lloyd, who led the Wildcats to a 33-4 record in his first season with the team.

Tshiebwe shot 60.6 percent from the field for the Wildcats and posted the highest single-season rebounding average in Division I since 1980. He joined Anthony Davis (2011-12) as the only AP Player of the Year winners in Kentucky’s illustrious history.

Tshiebwe earned 46 of the 60 votes from the panel of AP Top 25 voters. Wisconsin guard Johnny Davis received 10 of the remaining votes, while Iowa forward Keegan Murray (three votes) and Illinois big man Kofi Cockburn (one) finished third and fourth in the balloting.

Tshiebwe has not announced whether he plans to return to the Wildcats, who were stunned by No. 15 seed Saint Peter’s in the first round of the NCAA Tournament. The 6-foot-9, 255-pound forward from the Democratic Republic of Congo played 43 minutes in that overtime contest, racking up 30 points and 16 boards.

Lloyd, who previously spent 22 seasons as an assistant at Gonzaga, is just the third person to receive the AP Coach of the Year award in his first season with a team. The other two were Indiana State’s Bill Hodges in 1979 and Drake’s Keno Davis in 2008.

“I always tell people, it’s an easy answer: I love coaching and teaching,” Lloyd said. “Everything basketball-wise I’ve done, basically I’ve been a part of doing before, so I had a real comfort level and a conviction in what I wanted to do.”

Lloyd received 28 of the 61 votes, while Providence’s Ed Cooley got 21 votes. No other coach received more than three votes.