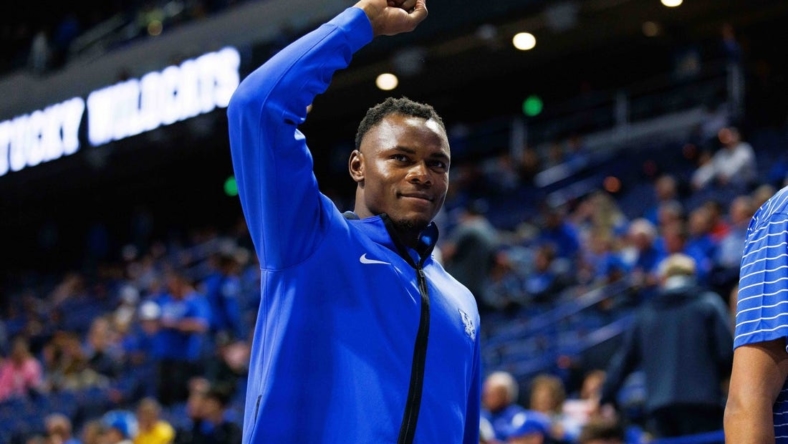 All-American forward Oscar Tshiebwe is doubtful for No. 4 Kentucky’s home opener Monday night against Howard as he continues to recover from knee surgery.

“I would be stunned if he played Monday,” head coach John Calipari said after Thursday’s 111-53 exhibition victory against Kentucky State.

Calipari added that he would be “somewhat surprised” if Tshiebwe, the reigning national Player of the Year, played in Friday night’s second game of the season against Duquesne in Lexington, Ky.

Tshiebwe told reporters last month that he “absolutely” planned to be ready for the season opener. He underwent a minor procedure on his right knee on Oct. 13 after experiencing some pain and swelling.

Tshiebwe transferred to Kentucky last year after 1 1/2 seasons at West Virginia and led the nation in rebounding. He averaged 17.4 points, 15.1 rebounds, 1.8 steals and 1.6 blocks per game in 34 starts.

He was named a preseason All-American and the SEC preseason Player of the Year.

Wildcats fans are hopeful to have Tshiebwe back for a Nov. 15 showdown against Michigan State in the Champions Classic in Indianapolis.

“It’s mainly a pain threshold and he’s just not normal,” Calipari said. “If he wanted to play Monday, I probably wouldn’t let him. He needs a few more days. If he wants to play Friday, I’m going to have to work him out myself and see. And if I did, he’d probably play 10 or 15 minutes just to get his legs under him.”