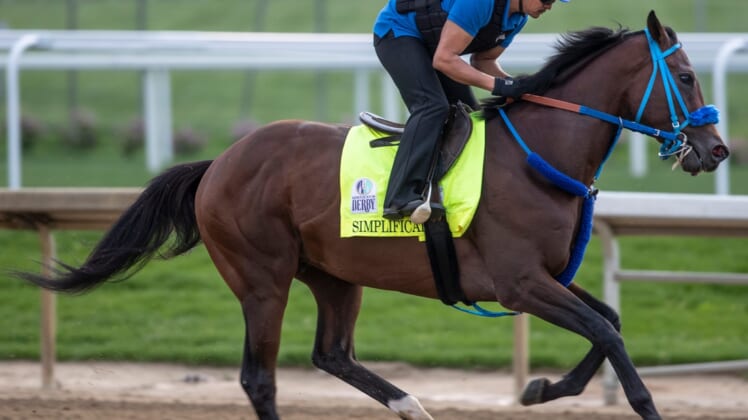 The 148th running of the Kentucky Derby on Saturday evening at Churchill Downs in Louisville comes with a split focus on the 2022 field and plenty of attention on who’s not in Kentucky.

Absent from the group of 20 thoroughbreds to enter the gate for the Run for Roses are any horses prepared by controversial trainer Bob Baffert, who is suspended for this year’s race – and next year’s as well – after Medina Spirit, last year’s winner, was disqualified for testing positive for a steroid that’s banned from use on race day.

But that doesn’t mean Baffert won’t have a say in the race at Louisville, Ky.

Two of the horses he trained as 2-year-olds and until his ban was levied this winter, Santa Anita Derby winner Taiba (10-1) and the ultra-talented Messier (8-1), are in the field and trained by Tim Yakteen, a former Baffert apprentice.

“All I know is the horses are in my barn and I’m moving forward with them,” Yakteen said this week. “I’m just trying to do my job and stay focused and on point and accomplish that task.”

The purse for the world’s top race for 3-year-olds is $3 million, with $1.86 million going to the winner.

There are plenty of storylines beyond Baffert.

Steve Asmussen, the winningest trainer in North American history, will saddle Epicenter (7-2), one of the favorites, in an attempt to break a 0-for-23 losing streak in the Derby.

Epicenter, the Louisiana Derby winner, might be Asmussen’s best horse since Curlin, Derby runner-up in 2010 who eventually garnered Horse of the Year kudos twice, or Gun Runner, who finished third in 2016 and was the Horse of the Year in 2017.

“The great level of confidence I have in Epicenter is because it does not appear I can do too much with him, whereas several of the other runners I’ve had in the Derby, it was very apparent that you could,” Asmussen said. “I think it would be extremely arrogant of me to think Epicenter was Curlin or Gun Runner, but he is going faster sooner than they were.”

One of the other favorites will be Zandon (3-1), the Blue Grass Stakes winner, who survived a tough trip to draw away in the stretch and looks like he will appreciate the added distance for the 1 1/4-mile Derby. He is trained by Chad Brown, who’s been one of the sport’s top conditioners in recent years and another who’s still looking for his first Derby victory.

Zandon, to be ridden by Flavien Prat, drew post position 10 in the field.

“It’s a really good post,” Brown said. “It gives my jockey options. But the horse still needs to break. There’s some speed inside, and some speed outside.”

Florida Derby winner White Abarrio and Mo Donegal, who came from off the pace to capture the Wood Memorial in New York, are 10-1 in the morning odds. Trained by Saffie Joseph Jr. and Todd Pletcher, respectively, a win by either horse would be no surprise.

Joseph Jr., who is from Barbados, captured the training title at Gulfstream Park’s recently concluded championship meet over perennial top-dog Pletcher and has become one of the top conditioners in the sport.

“White Abarrio needs to improve again to win the Kentucky Derby, but we think it’s within reach,” Joseph Jr. said. “We know it’s a competitive race, maybe seven or eight horses that could win it, but we feel like we have a horse going in the right direction.”