Kenny Pickett has small hands? Pittsburgh Steelers say they had no such concerns 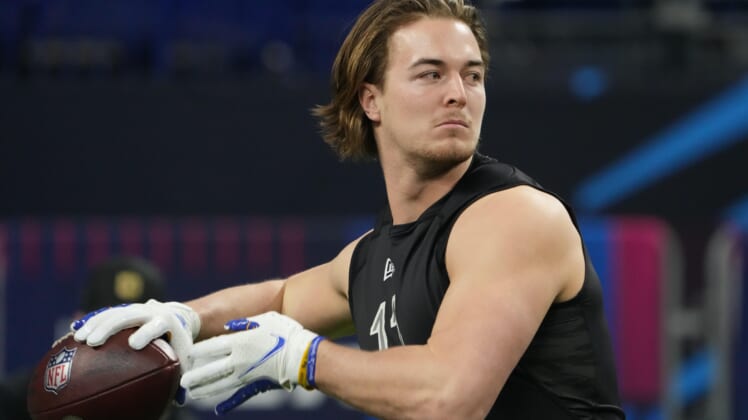 If we’re going purely off last season’s production, Pitt quarterback Kenny Pickett might have garnered true interest in the top half of the 2022 NFL Draft a week ago.

Yet, like any prospect leaving college for the pros, there are other factors to project that go further than the tape.

For Pickett, many suggested the QB’s hand size meant he wouldn’t be an elite player at the next level, but for the Pittsburgh Steelers, who selected the 23-year-old 20th overall, that’s not the case at all.

When Pickett’s hands measured in at 8 1/2 inches at the NFL Scouting Combine, it served almost as a death knell to many looking to form an opinion on the 2022 NFL Draft prospect. As ESPN writer Jeff Legwold noted, Pickett’s hand size is smaller than every other current NFL QB.

Does this mean Pickett simply can’t handle an NFL-sized football on a snap-by-snap basis? Will he be more prone to fumbles, inaccurate passes, and other gaffes throughout the game?

What about in cold weather, or rainy games when the football gets slippery and tougher to grasp?

Well, the Steelers don’t believe in any of that crap. Particularly because they’ve already witnessed Pickett play football in Pittsburgh weather, which, luckily is exactly where he’ll get to play half his home games on the same exact surface he played in college with the Panthers at Heinz Field.

Speaking on the Rich Eisen Show today, head coach Mike Tomlin brought up one particular game where Pickett impressed him.

“I potentially was capable of buying into that if I didn’t watch him play college football in Pittsburgh and deal with the elements that come with playing in this environment,” Tomlin said. “So you can buy into the hand size thing or you can just look at how he performed in a variety of conditions, and we have those conditions in Pittsburgh. So there was very little speculation from our perspective about how he might handle the ball in inclement weather, wet days, etc. They played North Carolina on a Thursday night, I went to the game, it was raining pretty good that night and he had no issues.”

“Honestly, I never paid attention to that,” Colbert said. “We look at the results. We watch Kenny play in our environment. . . . Can he throw the football? Absolutely. Did he have an excessive fumble rate? No, he didn’t. We just judge it on how he played.”

Not a bad stat line considering the conditions. Tomlin and Colbert bring up several good points. Maybe the fact that the Steelers were able to nab Pickett, placing him in the same conditions he thrived in as a senior can help him find success in the pros as well.

Pickett, who, like Teddy Bridgewater, wears two gloves and plans to continue doing the same in the NFL with the Steelers doesn’t see his “small hands” being an issue at the next level either, no matter where he plays.

“I think that’s like the No. 1 thing for quarterbacks in the draft process every year is hand size,” Pickett said Tuesday. “The good news is that I play in Pittsburgh. Anyone that’s been to Pittsburgh knows it’s not the nicest place to play in October, November. So I’ve had experience playing in tough weather…”

There’s no telling how Pickett’s translation to the NFL will go. He appears to have a chance to compete for the Steelers’ starting quarterback gig from the beginning, but he’ll have to beat out both Mitch Trubisky and Mason Rudolph first. Yet as the team’s first-round pick, chances are Pickett will get an opportunity sooner than later.