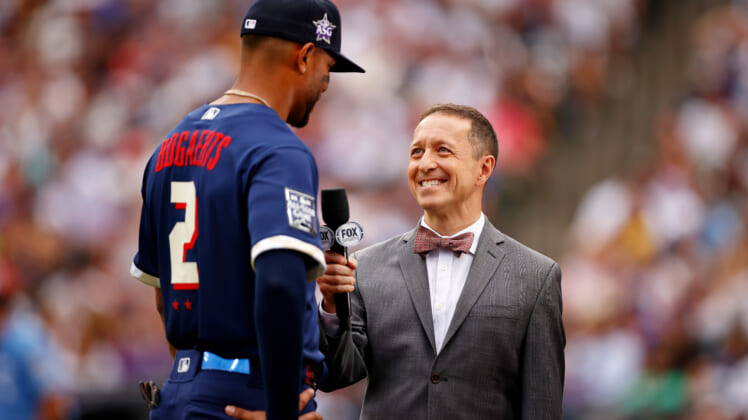 Those who have followed baseball over the years know full well who Ken Rosenthal is. He’s the sport’s version of Shams Charania and Adam Schefter.

Widely known for breaking news within the confines of MLB and working on Fox Sports’ broadcasts, Rosenthal is now out of a job.

According to Andrew Marchand of the NY Post, MLB Network has opted to fire Rosenthal following criticism directed at MLB Commissioner Rob Manfred.

“MLB Network has cut ties with insider Ken Rosenthal that is believed to be the end result of acrimony that peaked in the summer of 2020 after Rosenthal criticized commissioner Rob Manfred,” Marchand reported Monday evening.

According to the report, Rosenthal was first kept off the air after criticizing Manfred’s handling of the COVID-19 pandemic during the 2020 MLB season.

The insider wrote multiple articles questioning how Manfred was handling what ended up being a shortened 60-game season due to the pandemic. Apparently, the powers that be within MLB were not too happy with this.

“As MLB Network continues to look at fresh ways to bring baseball to our viewers, there is a natural turnover in our talent roster that takes place each year,” an MLB spokesman told The Post. “Ken played a significant part at MLB Network over the last 13 years. From spring training to the winter meetings, we thank him for his work across MLB Network’s studio, game and event programming, and wish him the very best going forward.”

Rosenthal, 59, will continue to work with Fox Sports after the league-owned MLB Network opted to fire him. He’ll also continue to pen articles for The Athletic.

To say this is not a great look for Major League Baseball would be an understatement. Insiders are expected to act as independant entities within the larger confines of breaking news. It seems that Manfred would rather have company “men” at his disposal, leading to even more questions about his role as commissioner.

Remember, MLB is currently in the midst of its first work stoppage in over a quarter-century with owners having locked out the players.