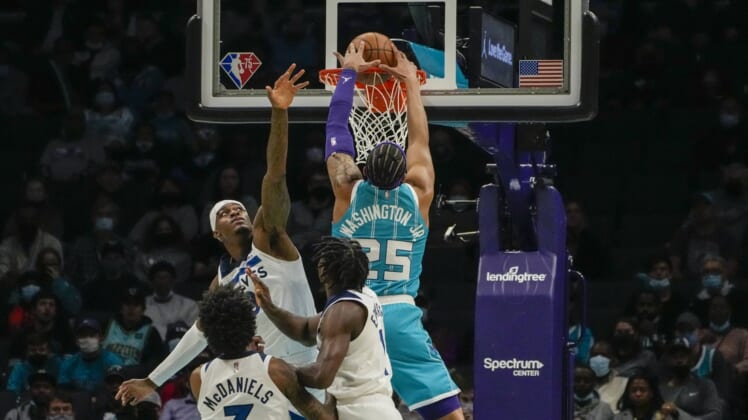 Kelly Oubre Jr. poured in 27 points off the bench and the Charlotte Hornets had the hot hand, making 23 shots from 3-point range in a 133-115 victory against the visiting Minnesota Timberwolves on Friday night.

Oubre sank seven of 13 shots from long range as part of his 10-for-17 shooting overall in 27 minutes.

Gordon Hayward and Miles Bridges each tacked on 18 points for the Hornets, who’ve won eight of their last nine games. P.J. Washington, who has been working his way back from an injury and played 24 minutes, came up big with 17 points and six rebounds.

This game was largely won based on Charlotte’s offense. The Hornets led 68-58 at halftime.

Minnesota was within 80-74 with less than five minutes to play in the third quarter. Oubre drained four 3-point shots in a three-minute span to help the Hornets close out the quarter with a flourish.

Charlotte’s lead was 99-80 before Taurean Prince hit a 3 at the end of the third.

Because of the shooting, the Hornets were able to weather their 15 turnovers. Four of those were charged to Ball.

While seven players reached double-digit point totals for the Hornets, they had 12 players overall in the scoring column. Half of the players hit at least two 3-pointers, with Washington next behind Oubre with five 3s.

It was largely a smaller lineup again for Charlotte with center Mason Plumlee sitting out with a calf strain.